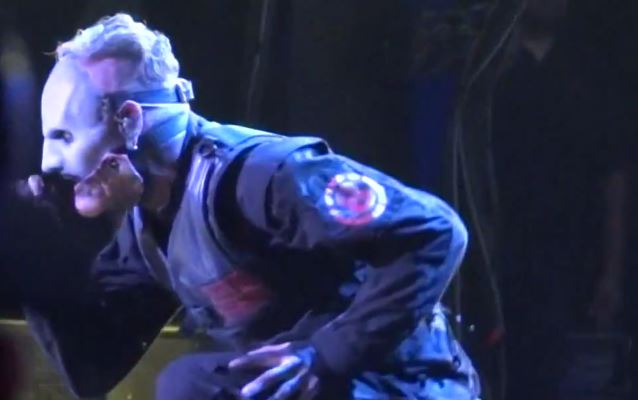 SLIPKNOT performed Tuesday night (August 4) in Mansfield, Massachusetts without the band's bass player, Alessandro "Vman" Venturella, who was rushed to a hospital two days earlier just six songs into the group's concert in Hartford. According to reports, Venturella was at the venue for last night's concert and played bass from behind the stage, but did not join his bandmates during the show.

Fan-filmed video footage of the Mansfield gig can be seen below.

Speaking to Mistress Carrie of the Worcester/Boston, Massachusetts radio station WAAF on Monday (August 3), SLIPKNOT singer Corey Taylor stated about Venturella's condition: "I can say that Alex is okay. We're being told that it was a dehydration problem that led to… Basically, he just kind of lost consciousness. The doctor said he's okay. He's been discharged from the hospital. He's gonna need plenty of rest, but we are not planning on canceling any shows. So, right now, we're just kind of looking at… basically, trying to balance what we need to do for the fans against what we need to do for Alex's health. We're just kind of playing it by ear right now. Luckily, we [had] a day off [on Monday], so he [could] kind of get some rest and get some fluids and everything. He's got a whole regimen that the doctor wants him to do and make sure he's taking care of himself. But the good news is that he's okay, [and] he's feeling better. And it just comes down to making sure that you take care of yourself."

SLIPKNOT guitarists Jim Root and Mick Thomson reportedly handled most of the bass duties on the band's latest album, ".5: The Gray Chapter", with some help from Venturella and former touring bassist Donnie Steele. Taylor spoke to the "Talk Is Jericho" podcast about how SLIPKNOT eventually decided to hire Venturella to finish out the record and join the band on the road. He said: "[The way] Vman [came into SLIPKNOT] was a little different [from the way drummer Jay Weinberg did], because we had a couple of people that we were looking at and that we had actually worked with, and it just wasn't vibing. Nothing against them technically — it just wasn't vibing. And I think Jim was actually the one who said, 'For now, let's bring Vman in. He can handle it.' 'Cause the dude is a ripper. A lot of people don't know that. We met him through MASTODON, so we've known him a long time, and Jim knew just how good he was. So he came in, and he just started handling it. And he's so easy to hang out with. He's such a great dude. And it just got better and better and better and better and better. And the question got brought up towards the end of the album. It was, like, 'What are we gonna do live?' And we were, like, 'What do you mean? He's coming with us.' It was a slower burn for him, because we had tried a couple of other people. But it worked so well that it was just, like, 'Okay, this is it.' And then it was trial by fire, 'cause now you're jumping out of the airplane. The first gig was Knotfest in front of 25,000 people. That was their first gig. But it came off, man, and it's just gotten better. It never gets easier, but it's gotten better."