Inkcarceration Music & Tattoo Festival returns for a third year this fall with a massive lineup featuring some of the biggest names and brightest new stars in rock, metal, and more converging in Mansfield, Ohio on September 10, 11 and 12 at the historic grounds of the Ohio State Reformatory (made famous by the movie "The Shawshank Redemption").

Headliners for Inkcarceration include SLIPKNOT, ROB ZOMBIE and MUDVAYNE — marking the first show in 12 years for the band, who recently announced their long-anticipated reunion in 2021. The talent-packed lineup also includes A DAY TO REMEMBER, MASTODON, HALESTORM, CHEVELLE, KILLSWITCH ENGAGE, BEARTOOTH, MOTIONLESS IN WHITE, ASKING ALEXANDRIA, STEEL PANTHER, FEVER 333, THE HU, POP EVIL and many more.

Single-day and weekend passes for Inkcarceration 2021 are on sale now at www.Inkcarceration.com, starting at $75 plus fees.

Clown from SLIPKNOT said: "After 20+ years on the road, it's always wonderful to experience new things. We are excited to be a part of Inkcarceration Music & Tattoo Festival. It will be great to get back out there and be with our family again. Stay safe and see you soon."

Adds Danny Wimmer, founder of Danny Wimmer Presents, which recently announced a new partnership with the creators of Inkcarceration to stage the festival: "We know firsthand what it's like to grow a high-concept festival from scratch, and the challenge of taking a great event to the next level. It always starts with the music, but you also need to create a great experience. We've been so impressed with Inkcarceration, and how quickly it became a must-see show on the festival calendar. Tattoos are such a central part of the rock 'n' roll lifestyle — something that fans are always talking about on our own socials — and it's such a unique location. I've toured the Ohio State Reformatory, and it's an experience you don't want to miss. DWP is excited to have the opportunity to bring Inkcarceration to that next level."

The current Inkcarceration Music & Tattoo Festival 2021 lineup is as follows (subject to change):

In addition to enjoying the diverse music lineup, fans will be able to book appointments with more than 75 tattoo artists, and receive complimentary tours of the famous Ohio State Reformatory prison. On site, there will also be gourmet food, a wide selection of beverages, camping and the return of the award-winning haunted house attraction Blood Prison.

Inkcarceration will offer a nightly tattoo competition where participating artists will compete in five categories for tattoos that are completed at the festival. Winners will receive first, second and third place awards. Judges include actor Robert LaSardo, bassist/actress Jennifer Arroyo and tattoo model Kyla DeLaCerda.

Single-day, weekend general admission and VIP passes for Inkcarceration are on sale now. 3-Day Weekend VIP passes are almost sold out, so festivalgoers are encouraged to buy early and save, since pass prices will increase in the coming weeks. A limited number of specially priced tickets for military personnel are on sale now via GovX.

Weekend Camping Packages are available for both car + tent and RVs. General Weekend Tent Camping starts at $199 and includes 500 square feet of space for two people, access to the A/C Camping Lounge, optional breakfast, lunch and drinks available for purchase, dedicated shuttles to and from the festival, re-entry during the festival via the camping shuttles, access to Camping Hydration Station, and access to showers and restrooms. General Weekend RV Camping starts at $299 and includes the same amenities as Tent Camping plus hookups for electric and water. Admission to the festival is not included in Weekend Camping Packages and must be purchased separately.

Hotel and ticket combination packages are also available. All tickets, including Field, VIP, Hotel Packages and Camping, may be purchased at www.inkcarceration.com/tickets.

VIP passes include access to all general admission areas in the festival grounds, as well as a dedicated festival entrance, access to grandstand viewing, an air-conditioned VIP lounge, upgraded food and drink experiences for purchase, dedicated flushable restrooms and more.

Ohio State Reformatory's historic building and grounds provide a perfect setting for Inkcarceration. The massive, awe-inspiring locale is recognized as not only one of the most haunted reformatories in the country, but also as the filming location for multiple Hollywood films. The most famous of these is the 1994 classic and IMDB highest-rated movie of all time, "The Shawshank Redemption".

The Ohio State Reformatory is centrally located, about an hour from Cleveland, Columbus and Canton/Akron, and within a three-hour drive from Toledo, Dayton, Cincinnati, Youngstown, and parts of West Virginia, Michigan, Kentucky, Indiana and Pennsylvania. Tent and RV camping packages are available on the grounds, and nearby hotel and ticket combo packages are also available.

As Inkcarceration 2021 draws near, Danny Wimmer Presents will be working with local officials to make sure the festival conforms to then-current social distancing protocols.

Inkcarceration is co-produced by Danny Wimmer Presents, one of the largest independent producers of destination music festivals in America and Daniel Janssen, one of the founders and general manager of Inkcarceration festival. 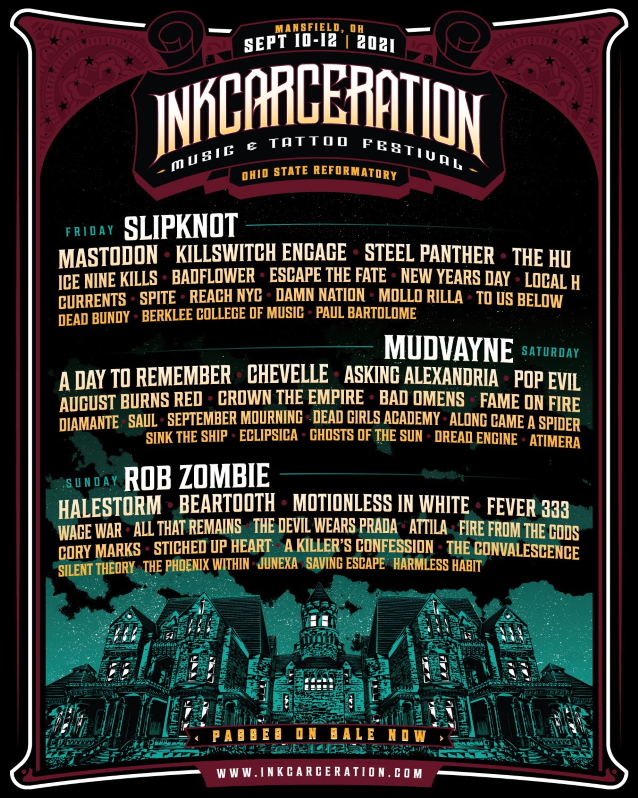