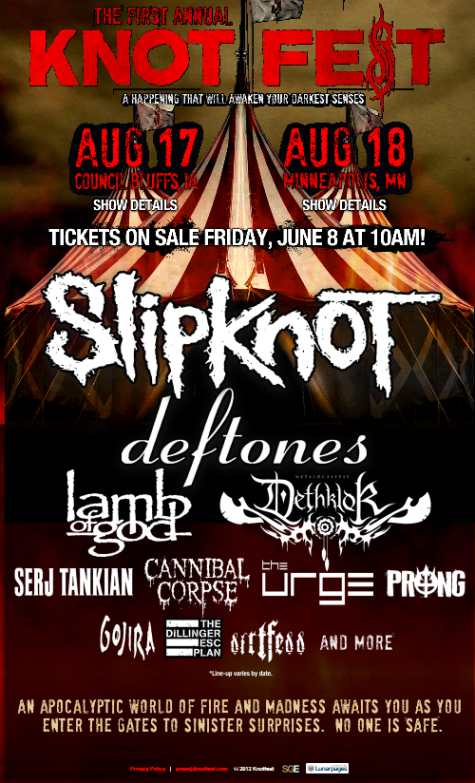 Step into an apocalyptic underworld where firebreathers, nightmarish creatures on stilts, fire and percussive light, and stunning visuals set the stage for an intoxicating and unforgettably sinister concert experience. The first-ever Knotfest — an extraordinary two-day metal and hard rock destination festival — will feature performances from SLIPKNOT, DEFTONES, LAMB OF GOD, DETHKLOK, SERJ TANKIAN, CANNIBAL CORPSE, THE DILLINGER ESCAPE PLAN, THE URGE, PRONG, GOJIRA and more. Knotfest will debut in the heart of America on Friday, August 17 in Council Bluffs, Iowa at Mid America Motorplex and Saturday, August 18 in Somerset, Wisconsin/Minneapolis, Minnesota at Somerset Amphitheater.

"Knotfest is a chance for us to bring the sensory-overload of a wild European carnival fest to the heart of America," explains SLIPKNOT's M. Shawn Crahan (a.k.a. Clown). "We're thrilled to delve deep into our catalogue and play a long set for fans. This festival is meant to be touched, felt, smelled and experienced by everyone on top of seeing an amazing day of rock and metal."

Featuring two heavy-hitting stages of hard music, Knotfest will create an intoxicating spectacle, as fans descend into a decadent apocalyptic underworld featuring circus big-top tents, pillars of fire, and amusement park rides — including the legendary Ring of Fire carnival ride (Saturday only — while masked performers, firebreathers and nightmarish stilt-walkers roam the festival grounds. Interactive graffiti walls and a drum circle made of junkyard cars will entertain fans and artists alike in the immersive, dark apocalyptic atmosphere. Upon entering the gates, sinister surprises including a SLIPKNOT museum and powerful, vibrant art installations await around every corner for fans to discover and explore.

Tickets for Knotfest go on sale Friday, June 8 at 10:00 a.m. CDT at the festival's web site, Ticketmaster and the box office. General-admission tickets and a limited number of VIP packages will be available with amenities ranging from early entrance, a shaded VIP bar and lounge with a main stage viewing area (21+ only),VIP catered meals, preferred parking and a meet-and-greet with SLIPKNOT.

To view all ticket and VIP options for both dates, visit www.knotfest.com.

"It's all about having fun and bringing something to the world of rock & roll, bringing it to the standard it used to be," Crahan tells RollingStone.com. "It's time for us to really engulf this idea known as Knotfest where we're in control, we make a day devoted to our mindset, our ideas, the people that we want to play with, the people that we think our fans want to be around. . . When everyone leaves, their senses [will be] overloaded, and I'm talking about smells, sights, hearing, your body, everything is overloaded with stimulation, because that's what SLIPKNOT does."

As previously announced, SLIPKNOT's greatest-hits album, "Antennas To Hell", is scheduled for release on July 17 via Roadrunner Records.

There is no word yet on which tracks will be included on "Antennas To Hell", and if it will contain any previously unheard music or other bonus content.

SLIPKNOT will headline the Rockstar Energy Drink Mayhem Festival tour this summer in the U.S., starting on June 30 in Devore, California.