SLIPKNOT has announced the initial details for next year's installment of the Japanese edition of the band's traveling festival, Knotfest Japan. The two-day event will take place on March 20-21, 2020 at the Makuhari Messe near Tokyo, and will feature the Iowa-based masked metallers as headliners on both nights. ANTHRAX will also appear on March 20 while KORN will perform on March 21.

This past June, SLIPKNOT's longtime manager Cory Brennan of 5B Management spoke to Music Week about Knotfest. Launched in 2012, Knotfest has been held across the globe, playing in the states, as well as Mexico, Japan and Colombia. Artists like DEFTONES, FIVE FINGER DEATH PUNCH, PAPA ROACH and BRING ME THE HORIZON have played Knotfest in the past.

"Knotfest started out of necessity and opportunity, chiefly a need in North America," said Brennan. "There was Rock On The Range, but there weren't any other heavy music destinations out there. They were all being hipster. There was nothing for rock bands in many parts of the U.S. We went into areas where there was no competition, where no one was thinking about the fans there, and we did it. The first one was in Omaha, Nebraska, the second one was in Wisconsin — they were back to back and it was amazing."

He continued: "They've created a community that can travel from country to country and resonate with 50,000-100,000 fans each time and it's not like anything else."

SLIPKNOT recently completed its first-ever "Knotfest Roadshow" tour, which hit 30 cities across North America. With a brand new stage set and production, and special guests VOLBEAT, GOJIRA and BEHEMOTH, the tour saw SLIPKNOT playing to the biggest North American audiences in its history. This fall, SLIPKNOT will headline U.S. festivals Louder Than Life and Aftershock, and then perform with METALLICA across Australia and New Zealand. SLIPKNOT then return to Europe in January 2020, where many of the shows sold out in a matter of hours. 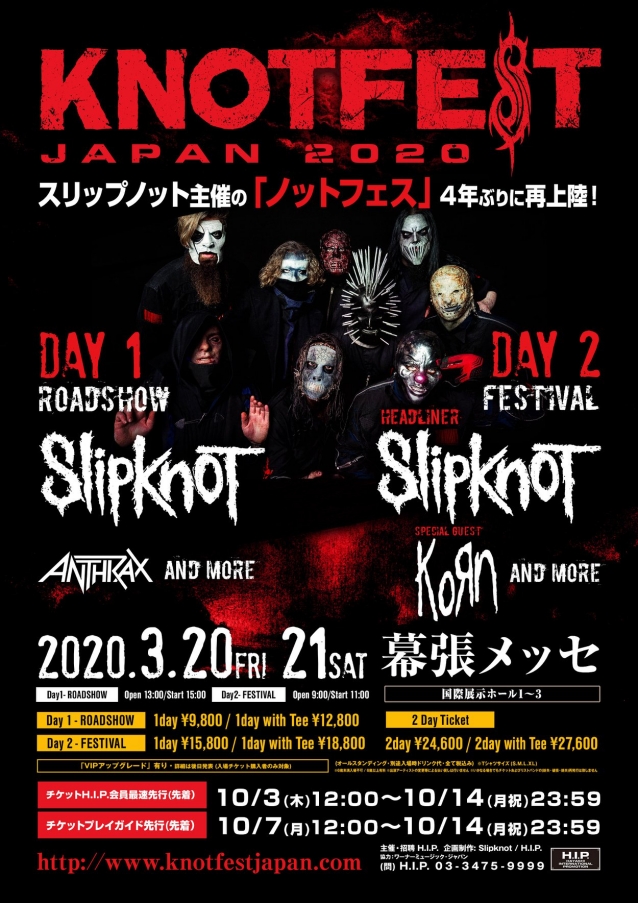