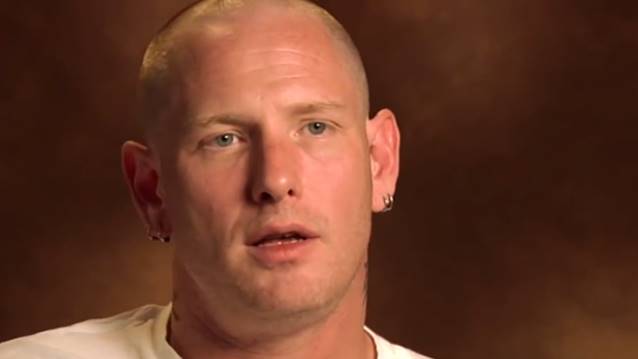 SLIPKNOT To Film Video For New Single 'The Devil In I'

On the reactions to the new SLIPKNOT song "The Negative One":

Corey: "People don't know what to expect from us, and that's kind of the way we like it.

"The great thing is that — I was telling this to somebody the other day — 'The Negative One' isn't our [first official] single [from the new album]. That was just a gift for the fans; like, we wanted them to hear a piece of the album. The single ['The Devil In I'] comes out in a few weeks, and it's completely different. It's more melodic, but it's dark, it's powerful, man. It's something different. People are gonna lose their minds when they hear that.

"['The Negative One' has] got the spirit.

"The thing I love is that everyone's reactions are very, very similar. They love the fact that there's new SLIPKNOT out. They also love the fact that it feels like old school meets new school. Like, you can feel the original craziness of the early stuff, but you can tell that the evolution has happened. And that's kind of what we were shooting for, you know?!

"Remember, I said I wanted the album to feel like a cross between 'Iowa' and 'Vol. 3', and I think we did that.

"Wait 'till you hear the whole album, because this story is so deep and so honest and so crazy that people are gonna lose their minds when they hear it."

On the speculation and rumors surrounding SLIPKNOT's status in the months leading up to the release of the new album:

Corey: "It's kind of the double-edged sword of word of mouth, isn't it? One of the best and worst things that you can have is people talking about your band. They're gonna talk about all the great things, but at the same time, speculation can become quote-unquote 'fact' over time, where it's… you know, certain people are the ones who are described as the 'main songwriters,' or 'This guy started the band,' or, 'That guy started the band.' To the point where people forget the truth. They forget what the facts are. So [releasing 'The Negative One'] is kind of a great way for us to, basically, just shut everyone up, get everyone excited, and to get them talking about positive things now with the band. Because it's been a hell of a ride. This last four years have been insane. Whether it's losing Paul [Gray, bass] or parting ways with Joe [drummer Joey Jordison]…

"Bands have gone through it before — other bands besides us. It's one of those things, [where] you either rise to the occasion or you fall by the wayside, and I think we all pulled together and we rose to the occasion."

On a possible release date for the new SLIPKNOT album:

Corey: "I'm not sure what the definite date is. I know we're shooting for October. Because we wanna release it right around the time the Knotfest shows [in San Bernardino, California] happen, so everyone can have it. We've got pretty much all the artwork done, which Shawn [co-founder, conceptualist and percussionist M. Shawn 'Clown' Crahan] did a hell of a job on. We're getting ready… probably in the next couple of weeks, we're gonna shoot a video for the first official single, which is called 'The Devil In I'. So we're gonna shoot a video for that. [And] that's about all I know right now. [Laughs] 'Cause we're still finishing mixes. We've still got a couple of songs left that need final mixes, then it'll go to mastering, and everything will just start kind of coming together, and [we'll come up] with a more stable, final release date, and as soon as we know that, the world will know."

Corey: "Starting in October, there'll be a couple of months of touring, mainly in the U.S. and shooting over to do those two Knotfests in Japan. And then break, obviously, for the holidays. And then next year, we're gonna start slowly moving out to the rest of the world, basically. I know we're eyeing Europe and the U.K., we're definitely looking at Australia, we're looking at South America, Canada… It's basically just the blueprint for the world, basically… There's Southeast Asia…. I mean, there's so much that we wanna do. Once we get that hammered out, we'll immediately get it up and we'll make sure that everybody knows about it."