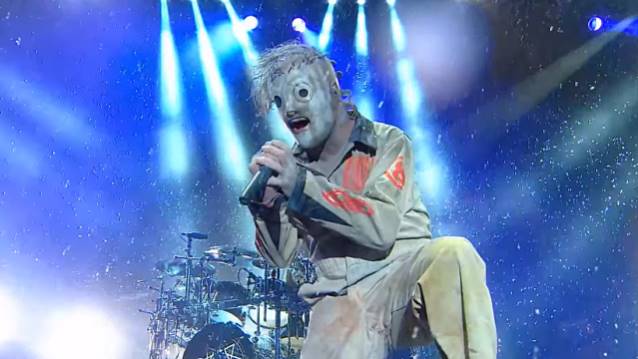 The second installment of SLIPKNOT's Knotfest will be held on October 24-26 in San Bernardino, California. The Iowa-based band will headline two days (Friday and Saturday) of the event, playing a different set each night, with more than two dozen other acts rounding out the rest of the the three-day bill.

Every Knotfest has been a fully immersive experience for fans, and this one ups the ante. In addition to performances from more than 60 of the heaviest bands on the planet, attendees will descend into an apocalyptic underworld featuring over 20 festival attractions including a Slipknot Museum (curated by the band),carnival rides, a zip line across the festival grounds, drum circles, pillars of fire, freaks, fire-breathers, stilt-walkers, and so much more.

Knotfest tickets are on sale now at www.knotfest.com. Limited quantities of early-bird discounted 2-day and 1-day festival tickets, as well as camping packages are available while supplies last at www.knotfest.com. VIP packages go on sale Wednesday, July 9 at 10:00 a.m. PT. A limited number of four different levels of VIP packages will be available with amenities including exclusive merchandise bundles, early entrance to a 21+ VIP Lounge, Pit Pass or the best reserved seats in the house, preferred parking and more. Hotel packages and travel packages will be available soon.

As previously reported, 2014 will also see the debut of Knotfest Japan. Set for November 15 and November 16 at Makuhari Messe in Tokyo, Knotfest Japan will feature SLIPKNOT who performed at last year's Ozzfest Japan, which drew capacity crowds and wide critical acclaim. The two-day music festival, headlined by SLIPKNOT on both days, will feature a mix of more than 20 international and Japanese bands.

"Knotfest is a chance for SLIPKNOT to bring the sensory-overload of a wild European festival — and now we're coming for you, California," says SLIPKNOT percussionist Shawn "Clown" Crahan. "Playing two different sets over two nights at one location is a new experience in the history of this band. This year's Knotfests in the U.S. and Japan are going to be on another level."

Knotfest in San Bernardino will feature performances by the following artists:

SLIPKNOT vocalist Corey Taylor told The Pulse Of Radio in 2012 that the idea for Knotfest had been in the works for a long time. "We've been talking about the concept of Knotfest for years," he said. "That's something that we've been kind of throwing around since the 'Iowa' album cycle days. To be able to do it now, it was the time to do it. It's obviously a passion project — we have no idea how well they're gonna go, but at the same time, you know, this band has never shied from trying new things."

Crahan said before the first Knotfest in 2012: "It's all about having fun and bringing something to the world of rock 'n' roll, bringing it to the standard it used to be. It's time for us to really engulf this idea known as Knotfest where we're in control, we make a day devoted to our mindset, our ideas, the people that we want to play with, the people that we think our fans want to be around."

Taylor recently revealed to the "Loudwire Nights With Full Metal Jackie" radio show that SLIPKNOT's long-awaited follow-up to 2008's "All Hope Is Gone" is "98 percent done."

SLIPKNOT's next CD will be the band's first since the 2010 death of bassist Paul Gray and December 2013 departure of drummer Joey Jordison, one of the group's founding members and key songwriters. 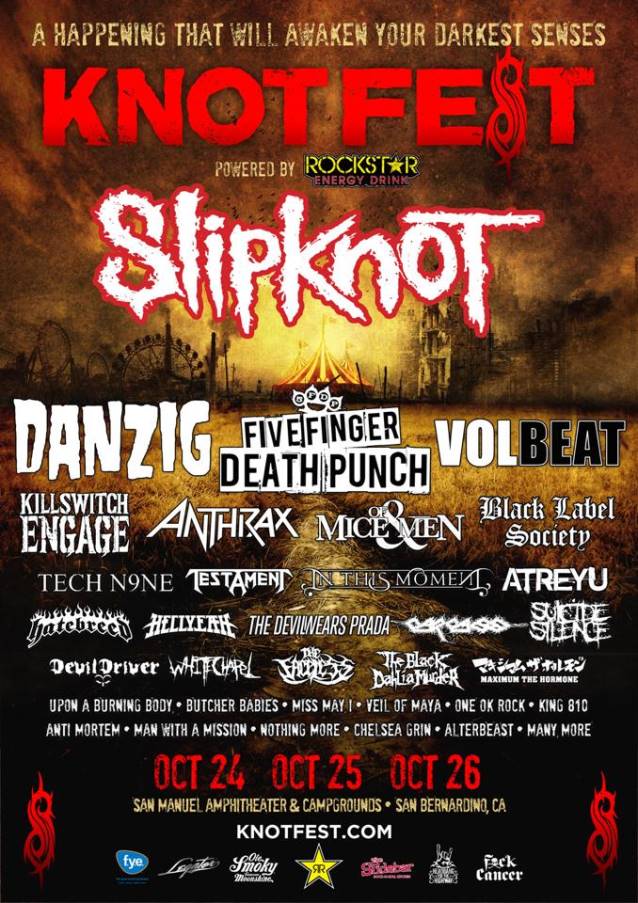