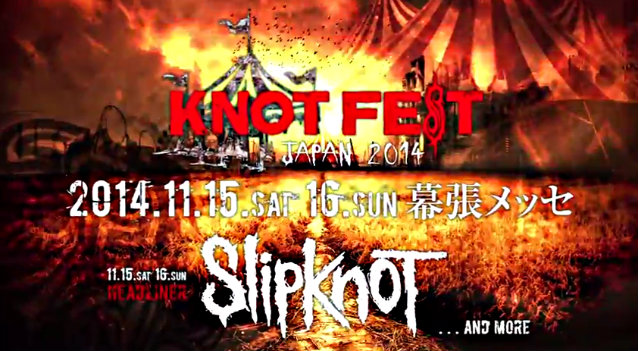 SLIPKNOT To Stage First-Ever Japanese Edition Of KNOTFEST In November

The first-ever Japanese edition of Knotfest, the music festival launched by the American metal band SLIPKNOT, will be held on November 15-16 at the Makuhari Messe in Tokyo.

A video announcement from SLIPKNOT percussionist M. Shawn "Clown" Crahan can be seen below.

The first Knotfest took place on August 17, 2012, in Council Bluffs, Iowa and August 18, 2012, in Somerset, Wisconsin. In addition to headliners SLIPKNOT, bands such as DEFTONES, LAMB OF GOD, CANNIBAL CORPSE and MACHINE HEAD performed at the event.

SLIPKNOT frontman Corey Taylor told U.K.'s Kerrang! magazine that the band will begin "major, major work" on its fifth album tis month. 17 demos are ready for SLIPKNOT's first CD since 2008's "All Hope Is Gone" and the first since the 2010 death of bassist Paul Gray and December 2013 departure of drummer Joey Jordison, one of the band's founding members and key songwriters.

Regarding the direction of SLIPKNOT's new material, Taylor said: "I can say that, to me — and this is only my opinion — it's a cross between [2001's] 'Iowa' and [2004's] 'Vol. 3: (The Subliminal Verses)', but that's honestly just scratching the surface. I think fans are going to be very, very excited when they hear this stuff."

He added: "I've written lyrics for everything that we have right now and it's feeling pretty good. It feels like the story of the band so far, which is a totally different take on what I've been used to writing with SLIPKNOT, but I think, because of everything we've been through, it's time to tell that story. Not just from our point of view, but from everything around us. So, yeah… it's going to be interesting. It's going to be everything you want in a SLIPKNOT album, and everything you wouldn't expect."

Taylor was unwilling to comment on anything "controversial" during his interview with Kerrang! and wouldn't discuss Jordison's exit from the band, but he did hint at deeper family problems that needed to be resolved, as he reflected how his life was during the band's break in activity.

"Last year, it felt like we put enough miles between the bad stuff and the good stuff — that we could start enjoying life again," he said. "Personally, my family took a couple of hits in the last year and a half, and it felt good to be able to let go of that deep breath we'd been holding. Professionally, I got to do a lot of stuff I wasn't expecting, which was cool, and now I'm feeling like it's time to revisit the 'KNOT and see where we're at right there. My hopes for this year are to be creative — getting that creative itch. And with the new SLIPKNOT album, I'm starting to feel that side of things."

SLIPKNOT guitarist Jim Root told The Pulse Of Radio late last year — before the news about Jordison broke — that he was feeling the urgency to make a new SLIPKNOT album. "You know, we haven't done a record since Paul's been gone and it's been pushing six years. And there's a lot of people in SLIPKNOT and a lot of fans and me myself kind of feel like it's time for that hurdle to be overcome. And for me, that's really like my number one priority and the most important thing for me right now."

SLIPKNOT has not disclosed the reasons for Jordison's exit, although the drummer issued a statement in January saying that he did not quit the band.

Root, who plays in both SLIPKNOT and STONE SOUR with Taylor, sat out STONE SOUR's recent North American tour with POP EVIL and STOLEN BABIES in order to work on the new SLIPKNOT album.