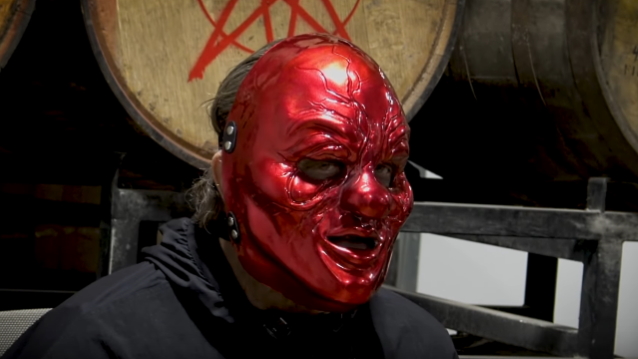 SLIPKNOT's CLOWN On Mask-Design Process: 'The Heaviest Part Of It Is In Your Own Brain'

SLIPKNOT percussionist M. Shawn "Clown" Crahan and Murphy Quint, the head distiller at Cedar Ridge Winery & Distillery, recently answered a number of questions submitted by members of the band's fan club, Outside The 9. Part one of the question-and-answer session can be seen below.

Asked how "in-depth" his mask-design process is, Crahan replied (as transcribed by BLABBERMOUTH.NET): "For me, it's always been easy. I wake up. I have a feeling. It seems natural. It goes on. I'm there. I look at it, and I go, 'That's exactly what I feel like. The in-depthness is in my mind. It's the subconscious thought of something I can't hold. How do you mold that in your brain? How do you turn it in circles? How do you look into it? How do you fit into it? It's so untangible, it's so not here, so the process, the heaviest part of it is in your own brain — in visualizing the pain or the discomfort you actually wanna put yourself in for that album cycle. For example, for this mask, for the cycle 'We Are Not Your Kind', I chose not to have something that covered my entire head, because I've done it quite a bit over my career, and the exhaustion from heat not being able to escape fatigues my show, and I'm wanting to give a better show personally, physically, spiritually, mentally.

"So it's a manual task once it gets out of the subconscious and into the conscious and then into words and then into body language and possibly pencils," he continued. "And then it's just work from there. But the real tedious stuff comes from staying up at night, wondering who you're gonna be, who you can represent.

"As we all know, we're a very unique band because I wouldn't say that we go all out on these things, and I think that's what makes them so personal and special, whereas we all know you can watch a Hollywood movie and there could be so much money spent on these things, but maybe it's overdone, maybe it looks overdone, maybe you don't feel that character.

"I've always felt that we just naturally know — whether it's expensive or plastic or leather or latex — just let it be what it is," Crahan added. "And that's about as hard as it is — is to admit to yourself who you're going to want to be for all of you for the next 18 months, possibly the next three years."

Last year, Crahan told "The Fred Minnick Show" that he can't ever see SLIPKNOT ditching its trademark costumes and performing unmasked. "There's not a day that doesn't go by that every member wishes we didn't have to wear that stuff," he said. "Especially since it was my idea in the sense of I brought it to the table. And for all I know, maybe some of the guys think it's the worst thing ever. They went with it because of our love for each other and our dream and our brand, but secretly, some people could be just, like, 'I can't believe I signed up my whole life for this,' whereas I'm only doing it with that. So I never forced it on anyone. It seems like it's what we wanted to do. And it's helped, and it really is who we are.

"People ask me all the time, 'Are you gonna take off the mask?'" he continued. "And I say, 'Why do I need to do that?' You're only asking me because of behavior. You're only doing that because you have a hypothesis of all the other artists, some way or not, but I'm not a part of that test, that field research. I'm the Clown in a band called SLIPKNOT. We are not your kind. We are not like you. We're not part of your hypothesis.

"For me, it's pure religion," he added. "It's my life. And I can't ever fathom going in so personal because of laziness or stress or just the will to not wanna put it on anymore. I signed the deal we did in the beginning, and there's just never been any [thought] of anything else. I really couldn't fathom us any other way. I would feel cheapened; I would feel betrayed. I think that's the difference. It's the self-worth in the dream, in the art that you create. Ours is very, very, very precise, and we do not deter away from staying the course."

Crahan's comments echo those of SLIPKNOT singer Corey Taylor, who told Ireland's Overdrive in a 2019 interview that he couldn't see SLIPKNOT ever going unmasked.

"It's such a part of our art," he said. "It's also part of the reason why we change the masks with every album. Unlike KISS, they have always used the same make-up and it never evolved. For us, we've changed with every album and not only the masks but also the outfits. You can totally tell every album by the uniform. I think things like that have kept SLIPKNOT relevant, it's kept the music vibrant, it's kept the live shows different and it's kept us from stagnating. So, no, I could never see us losing the masks. If we ever got the notion to do SLIPKNOT unmasked, I think I'd be, like, 'Well... eh, no.' We are all in our 40s now and we still very much have a love/hate relationship with what we do but every time we step on stage, we're absolutely prepared to give it everything we've got. So, for me, personally, when that feeling stops, when we start trying to cut corners and try to make things easier, just so we can 'get on with it,' that's when it's gonna be time to call it a day."

Last year, SLIPKNOT was forced to cancel all of its summer 2020 tour dates, including the "Knotfest Roadshow", Knotfest UK and Knotfest At Sea, due to the coronavirus pandemic which is sweeping the globe.

The band had been touring in support of its latest album, "We Are Not Your Kind", which came out in August 2019. The disc sold 118,000 equivalent album units in the U.S. in its first week of release to land at position No. 1 on the Billboard 200 chart.