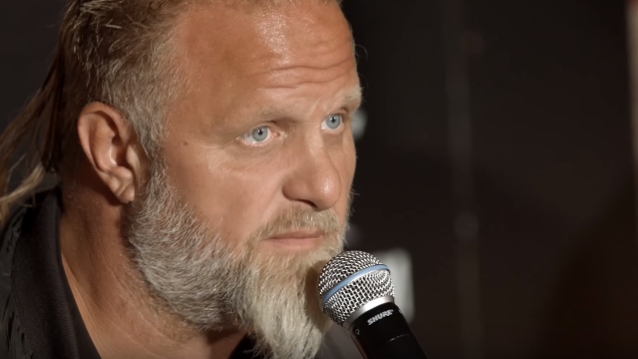 SLIPKNOT percussionist M. Shawn Crahan (a.k.a. Clown) has revealed to Metal Hammer magazine that he is sitting on an album's worth of music recorded during the "All Hope Is Gone" sessions in 2008.

While making SLIPKNOT's fourth album, Crahan and his bandmates Jim Root, Corey Taylor and Sid Wilson wrote and laid down different music at a separate studio. One of the resulting songs, "Til We Die", is featured on the digipak release of "All Hope Is Gone", but the rest has yet to see the light of day.

Crahan told Metal Hammer: "There's a collection of songs that were recorded, 11 I think, I've held on to them for 10 years because it hasn't been right, and I'm going to let you know now that it's feeling right.

"Jim would write guitar then go down and play guitar on the album, then come up and finish playing guitar on the song. That's how we'd kill time during those four months."

He added: "There's a big collection of music, it's fucking really amazing. It's so amazing it had to be held back to wait for the right time, it's been 10 years. It wasn't going to be one of those things to loosely go out and confuse everyone, and piss everyone off.

"I'm not going to put music out to spite people — we do things the right way in this camp. The right way is that sooner or later, people need to be made aware of it because it's the truth. It happened. We spent time doing it, we worked it every day, we mixed it, we mastered it, there's artwork. It's amazing stuff. But it's all got to be right in the story of SLIPKNOT."

The 10th-anniversary edition of "All Hope Is Gone" will be released on December 7. The package will feature re-imagined artwork and a bonus disc containing an audio recording of the band's 2009 headlining concert at Madison Square Garden.

SLIPKNOT also topped the Billboard chart with its latest album, 2014's ".5: The Gray Chapter". That effort sold 132,000 copies in its first week of release.