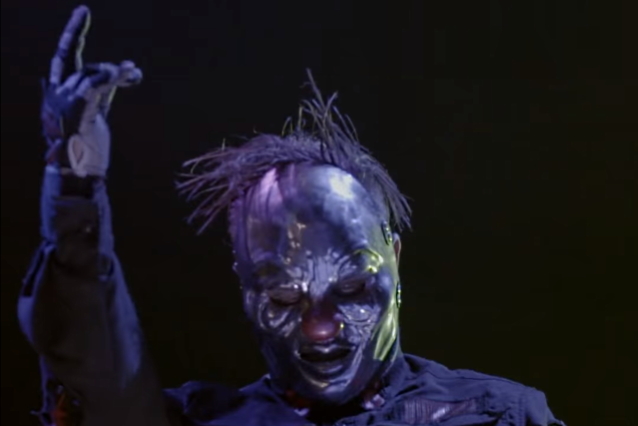 SLIPKNOT percussionist Shawn "Clown" Crahan spoke to Setlist.fm about how the band goes about creating eclectic setlists and playing music across all six studio albums.

He said (see video below): "Right now, we have the best problem we could ever have — we've got six albums for 90 minutes. And it's awesome. Songs are not getting played, and that's great, because the ones that are are awesome. So we're finally at a place in our career where it's, like, 'Hey, we have enough of what we love to play live.' Then it's really whatever we wanna do."

"A setlist compared to live energy and human beings that need the now is much different than the human being trapped in its own thought process in a car, needing that music more than anything, because of what life has handed that individual. So what goes into doing that is purely insanity. And actually, I thought we were gonna have a full-on war [while sequencing SLIPKNOT's latest album, 'We Are Not Your Kind']. I think a lot of people may have gotten out of the suggestions and just let those who were absolutely crazy on the track listing.

"If everybody stays open about the art, everybody will get a little bit," he continued. "But it's a compromise, 'cause nobody can get their one way, because no one's able to see it. I have my opinion on how I think it needs to go, but I was really happy when someone threw a wrench in it, because now I can enjoy it, because they changed a couple of my orders and I changed a couple of theirs, and someone else came in, like a producer, and he had his two cents. But by the end of it, we all gave a little bit, but we all gave enough to where we're, like, 'It's not fully me. Now I can really enjoy it.'

"When you're just like this [makes circles with his fingers around his eyes] for four years, does it even matter?" he added. "When you finally get it in that sequence, you listen to it in that order, then you go through those emotions and those feelings, and only you can make yourself feel its chemicals. So you know if you are feeling, you know that you've got the right sequence. very different from live, though. You have to kind of see where the world is to make the setlist. Everybody is a little out of control, we'd better get some barnburners. We call our heavy ones barnburners, so we're, like, 'We'd better burn all the barns.' So… greatly different."

SLIPKNOT kicked off its "Knotfest Roadshow" tour on July 26 at the Shoreline Amphitheatre in Mountain View, California. The performance marked SLIPKNOT's first full-length U.S. concert since the band played at the Louder Than Life in Louisville, Kentucky on October 2, 2016.

SLIPKNOT's set included two new songs: "Unsainted", which will appear on the upcoming album "We Are Not Your Kind", and "All Out Life", which was released as a standalone single last October.

"Knotfest Roadshow" features support from VOLBEAT, GOJIRA and BEHEMOTH. Produced by Live Nation, the 29-city outing will continue through September 8 where it will conclude with a performance at Cynthia Woods Mitchell Pavilion in The Woodlands, Texas.

This past May, SLIPKNOT performed two songs an episode of the late-night American talk show "Jimmy Kimmel Live!"

"We Are Not Your Kind" will be released on August 9 via Roadrunner. The disc was once again recorded at a Los Angeles studio with producer Greg Fidelman, who engineered and mixed SLIPKNOT's 2004 album "Vol. 3: (The Subliminal Verses)" and helmed 2014's ".5: The Gray Chapter".