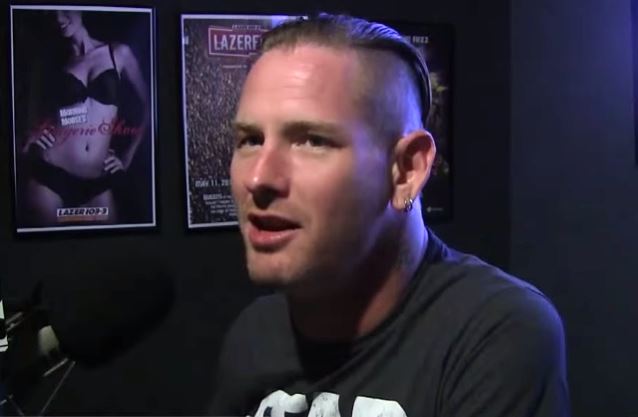 On September 15, Andy Hall of the Des Moines, Iowa radio station Lazer 103.3 conducted an interview with SLIPKNOT and STONE SOUR singer Corey Taylor. You can now watch the chat below.

Speaking about the political stalemate over the controversial issue of human-induced climate change, Taylor said: "Everybody's B.S.ed themselves into thinking that, 'Oh, the worst of it's in the future.' No, we're living it. You know, like… Oh, God, it sucks… The fact that Donald Trump is a real candidate for the presidency of the United States of fucking America… Are you kidding me? Okay. At this point, let's just nominate [American entertainer and comedian] Emo Philips too. Philips [and fellow comedian] Pauly Shore…. 2020."

After Hall pointed out that this is the direction the U.S. is moving in, Taylor countered: "It ain't the direction I'm moving. I'm emigrating." Asked where he will go, the singer said: "I don't know… I'll figure it out. England's too expensive. That was my first thought. 'Cause I've actually priced out real estate there. England's way too expensive. So I might end up in Guam or something. I'll just build a hut. Belize. There are tons of islands in Belize that you can buy. I actually looked this up, because, for, like, five seconds, I was, like, 'I'm gonna buy an island. Screw these people.' And there are Caribbean islands for sale [via a dedicated web site]. I don't even know if this still exists anymore, but I could have bought a half-natural for, like, five hundred thousand U.S. dollars, by the way. Unfortunately, I would have had to build a hut there, because there was nothing there."

Corey Taylor released his third book, "You're Making Me Hate You: A Cantankerous Look At The Common Misconception That Humans Have Any Common Sense Left", on July 7 via Da Capo Press, a member of the Perseus Books Group. The book acts as a commentary on society and pop culture and has been described as "Taylor's take on Peter Griffin's 'You Know What Really Grinds My Gears'."