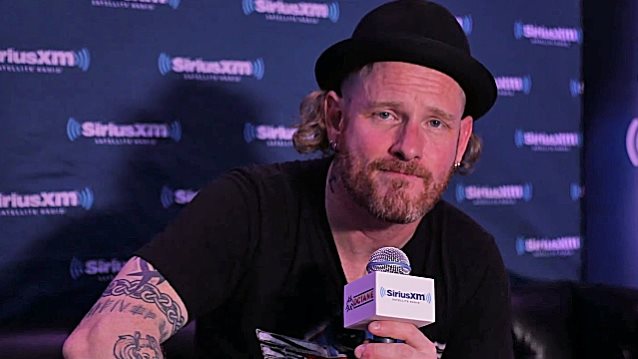 SLIPKNOT and STONE SOUR frontman Corey Taylor had an emotional moment as he remembered Chris Cornell, saying that his "one regret" is that he never got to tell the SOUNDGARDEN singer how much Chris inspired him.

Speaking to SiriusXM at this weekend's Rock On The Range festival in Columbus, Ohio, Taylor said (see video below): "[Chris] was truly an inspiration for me as a songwriter, as a singer, as a performer, because he wrote what he wanted. He didn't care about anything. He didn't let genres get in his way, he didn't let styles get in his way, and he was like that from the very beginning, whether it was stuff like 'Badmotorfinger' or the solo stuff that he put on the 'Singles' soundtrack, like 'Seasons'. It was amazing! He could go back and forth and all over the place musically, and that inspired me so much. And my one regret is that I never got to tell him… [Pauses and gets choked up] We love you, Chris."

STONE SOUR honored Cornell by performing a cover version of SOUNDGARDEN's "Outshined" Thursday night (May 18) at the Rock On The Range Kick-Off Party at Express Live! (formerly LC Pavilion) in Columbus, Ohio. Taylor stated about his band's decision to play the track: "It was important, you know. Chris's impact can never probably ever be really encapsulated and spoken about enough. So us playing 'Outshined', and playing it with heart, and not just because we wanted to, but because we needed to, it came off really well, and the audience loved it."

The family's attorney, Kirk Pasich, said in a statement that the family would await the toxicology results to see if Ativan — the anti-anxiety prescription drug Cornell was taking — or other drugs contributed to his death.

"The family believes that if Chris took his life, he did not know what he was doing, and that drugs or other substances may have affected his actions," Pasich said.

According to CNN, Cornell will be laid to rest on May 26 in Los Angeles. His body will be flown from Michigan to Los Angeles on Sunday, and the singer will be buried at the Hollywood Forever Cemetery.

Chris Cornell remembered at Rock on the Range

Chris Cornell's music and spirit live on here at Rock On The Range.