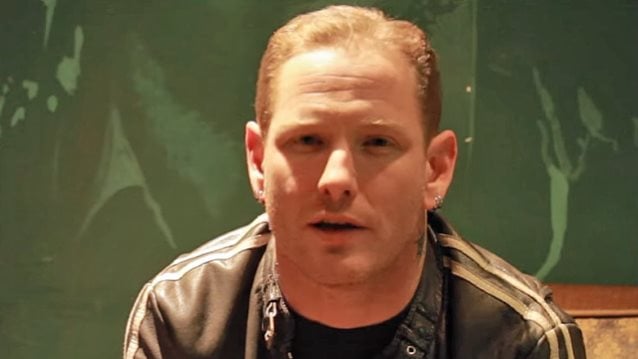 SLIPKNOT and STONE SOUR frontman Corey Taylor's appearance on "Doctor Who" was referenced on the January 20 episode of the long-running game show "Jeopardy!"

"Jeopardy!", hosted by Alex Trebek, began in 1984. This game show, which generally airs weekday evenings, features three contestants answering a series of questions (posed by Trebek in the form of an answer) on a variety of topics. Each question has a monetary value and contestants can get extra points if they hit a "Jeopardy!" "Daily Double." The final segment of each episode has them answering a "Final Jeopardy" question. Whoever has the most money accrued at the end of the show gets to return to compete on the next episode of "Jeopardy!"

During the January 20 episode, Trebek mentioned Taylor's appearance on "Doctor Who" with the answer: "Corey Taylor of metal band SLIPKNOT provided the roar of an alien warlord on this Peter Capaldi show"

Taylor was tapped by the producers of "Doctor Who" to lend his "deep and terrifying roar to the alien warlord known as Fisher King" in the October 10, 2015 episode of the BBC television series.

Behind-the-scenes footage of Taylor on the set of the show can be seen below.

Asked how his involvement with the program came about, Taylor told U.K.'s Kerrang! magazine: "Dude... So, what happened was, while we were on tour with KORN [earlier this year], we were approached about doing the tour of the Doctor Who Experience [the BBC's thrilling family attraction in Cardiff], and I was asked whether I would be interested in doing something for the show. And I freaked the fuck out."

He continued: "I've been a 'Doctor Who' fan since I was a kid. It's been a part of my life forever. So, of course, the answer [to their offer] was,'Fuck yeah!' We went down, I took a million pictures, and then we went to BBC Wales. They described the character that I was going to be vocalizing, and I screamed into a mic for about an hour. [Laughs]"

Speaking about his first early memories of "Doctor Who", Taylor told Kerrang!: "The beautiful thing about 'Doctor Who' is that everyone has their Doctor, and mine was Tom Baker. I can remember this crazy show where this guy in a beautifully long scarf was running around and saving the world and shit. It was so quirky, and yet so sci-fi and so good that you just couldn't help but get into it. A lot of people talk about the older stuff and how it doesn't age well — but that's kind of the point. It was a shoestring budget, but a huge world that you could sink your teeth into."

Fisher King was previously described as a massive green alien that has tons of horns protruding from his body.

Fisher King is played by Neil Fingleton, the tallest British-born man and the tallest man in the European Union at 7 ft 7.56 in (232.6 cm) in height, and his speaking voice is "Shaun Of The Dead"'s Peter Serafinowicz.

So Corey Taylor was an answer on Jeopardy today @CoreyTaylorRockpic.twitter.com/aIKNwU6hvT