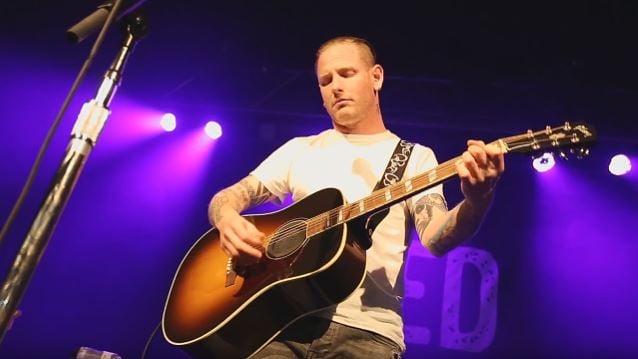 SLIPKNOT's COREY TAYLOR On PRINCE: 'There Wasn't A Genre That He Didn't Touch On'

One of the most emotionally charged tributes to legendary singer, guitarist, songwriter and producer Prince on the day of his passing came from SLIPKNOT and STONE SOUR frontman Corey Taylor, who was scheduled to perform that night at the very club that Prince helped turn into a must-see mecca after featuring it in his breakthrough 1984 film "Purple Rain": Minneapolis's First Ave. Taylor paid his respects by taking the stage and opening his show with a cover of "Purple Rain", followed by a rendition of "Little Red Corvette".

The next day, Taylor spoke to Carlota of the KOMP 92.3 FM radio station in Las Vegas about what Prince has meant to him and the experience of playing Prince's hometown on the very day the Grammy-winning icon was found dead.

"It was intense, as is to be expected," Taylor said. "I mean, obviously, waking up, and you get that news, and then it kind of slowly dawns on you that not only are you in his hometown, but you're playing the house that he helped build. You're kind of, like, 'Ah, Jesus.' It was one of those things where you can either bow out or you can step it up. And for me, growing up as a massive Prince fan, there was no way that I was not gonna show respect to that man. And it seemed, to me, like the audience enjoyed it, and it seemed like people understood the respect that I was trying to show. I'm just glad I was a part of it. I'm just glad I was a part of history, to be able to show respect to a man that inspired me the way he did."

Taylor also talked about Prince's exceptional musical talent and how its influence spanned genres. He said: "There wasn't a genre that [Prince] didn't touch on. And not only that. There wasn't a genre that he could kind of shoot through the Prince filter and make even better. It was just like, 'Whoah!' I mean, the guy was… he was incredible. Every song that you can think of was not only different and creative, but it was just… it was amazing."

According to Taylor, Prince managed to appeal to music fans of different colors and backgrounds, including fans of SLIPKNOT, many of whom were in attendance at Thursday night's concert.

"I've been very vocal about being a fan of Prince for a very long time, but I think [Thursday night] was the first time I was able to really show my appreciation," he said. "And it was crazy. I'm in First Avenue, on that stage, with all of these fans, who, some may be Prince fans, some may be more heavy metal fans but appreciated Prince because he came from Minneapolis. And, I mean, I don't know if you've seen the video [of my performance], [but] it was so loud when it gets to the chorus. People were losing their minds, because that was the affection for him and his creativity and the fact that… Even if you were a hardcore metal guy… There's so many people I know out there who were maybe even secretly Prince fans, and [Thursday] was time to just give up the secret and embrace it, and that's what it was all about."

Taylor, who had previously performed "Little Red Corvette" as part of his solo appearances, described his mindset going into Thursday night's concert. He said: "It was heavy. Getting into it was heavy. The couple of things that went through my head was… obviously, first of all, 'Don't mess it up.' And second of all, 'Just kind of let the emotion happen.' 'Cause, I mean, honestly, I've known the words to ['Purple Rain'] for going on thirty years, but I'd never sat down and played that song before. So I literally learned it [Thursday] afternoon with the idea of, you know, that would be my tribute to him. So it was a little nerves, a little of trying to get a handle on the moment. And also, I didn't wanna say anything; I just wanted to play the song. Because, to me, that was the most respectful way that I could, you know, just show it. I was just, like, 'Don't even set it up. Just let the song breathe and let it do what it needs to do.' So that was me just kind of preparing myself for that."

The SLIPKNOT frontman admitted that he got very emotional when he first heard the hugely acclaimed and influential musician's lifeless body was found at his mansion in Minnesota.

"I bawled my eyes out," Taylor said. "I was crying the entire time watching CNN. I was okay up until the point when they confirmed it. Because there was that split second… Even after TMZ was reporting it like they do, there was that split second where it hadn't really been confirmed yet on any of the 'reputable' news feeds. And as soon as they confirmed it, I lost it; I really did. And I think the reason why is because when you're dealing with someone as poignant and as incredible of a talent as Prince, you not only flashback to his music, you flashback to the first time you heard it, you flashback to almost every time a song of his came on and it was like a special moment, you flashback to sometimes like the first time you saw him play live… just all of these things. It was the same thing when [David] Bowie died; I had the same exact reaction. And I remember I was just crushed by all of these memories. Like the first time I held the cassette tape for '1999' in my hand, the first time I watched him perform on a live video, on MTV, for 'Baby I'm A Star' and 'I Would Die 4 U'; I remember that video so vividly. The first time I saw the video for 'Batdance'. Like all of these crazy, crazy memories of this guy who I worshipped, for lack of a better term. You're bombarded with all of those memories, and then you kind of come to the realization that those memories are at a close, and it's a crushing idea. But the one thing that helps you get through it is the fact that you not only have those memories but you have all of these songs that you can use as a touchstone to come back to."