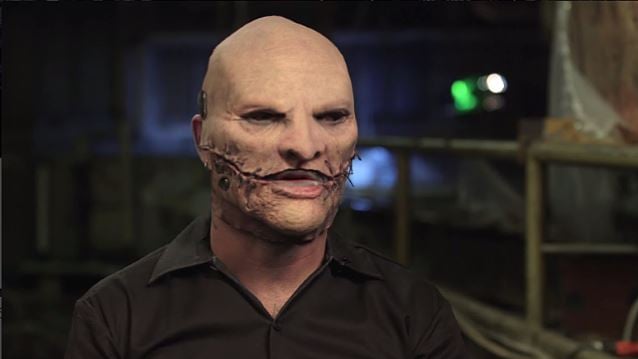 SLIPKNOT's COREY TAYLOR: PAUL GRAY 'Was One Of The Biggest Lovers Of This Band'

In a brand new interview with BluntMag.com.au, SLIPKNOT singer Corey Taylor spoke about the band's decision to record a new album following the tragic 2010 death of the band's bassist, Paul Gray.

"Paul was such a big part of this band, not only as a major contributor and one of the quote-unquote chiefs, but he was also one of the biggest lovers of this band," he said. "He would get stoked about the music in a way that I've never seen; whether it was his that he was writing or music that other people were bringing in. He could see the potential in everything — and without that there, obviously it kicked the crap out of us."

He continued: "There really was that question of 'do we want to continue?' And starting with those [first few] shows [we played after Paul's death], it really helped us get back on our feet — and the fans were able to be there with us. That was the first stage of it. We started to see the future a little stronger: 'Okay, we still like doing this, so what's next?'"

Taylor added: "In November of [2013], I sat down in the garage after having a conversation with [percussionist] Clown and just decided that it was time for us to start. It was the big white elephant in the room that nobody wanted to talk about, that we needed to do another record. We'd been touring for quite a while and there was a little bit of pressure on us. And I don't know that anyone else had made any steps to make that happen, so it was kinda thrown into my court to be the initiator of what we ended up with.

"In January [of 2014], a bunch of us started looking at what was on the horizon, what felt right. And it turned out that all of us had written a bunch of music — I had written some stuff, Clown had written some stuff, Jim [Root, guitar] had a ton of material — and we started comparing notes. And all of a sudden the idea started to form. And that's when it clicked. Clown and Jim and the person who's playing drums right now started banging out some live demos, and I started writing to it. We could hear the life coming back into it. That was the germination of it."

"Custer" is the latest single from SLIPKNOT's 2014 album, ".5: The Gray Chapter", which came out in October.