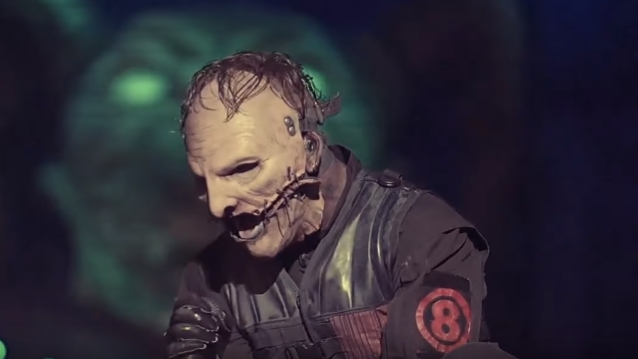 SLIPKNOT frontman Corey Taylor says that he has been "wrongfully accused" of stealing money from the band's former percussionist Chris Fehn.

The singer's comments come just four days after The Blast reported that Fehn had filed a lawsuit against his longtime bandmates, claiming that he hasn't been properly compensated for his years of touring with the group.

After a fan suggested on Twitter earlier today that SLIPKNOT bring back former vocalist Anders Colsefni as Fehn's replacement, Corey replied: "Fuck I would LOVE that." Reacting to Taylor's tweet, another fan called the hypothetical Colsefni-SLIPKNOT pairing a "bit dickish," to which responded: "You think that's dickish, try being wrongfully accused of stealing money from someone you cared about, and having a lot of your fans believe it."

According to The Blast, Fehn claims in his lawsuit to have always been told that the money from merchandise and touring is funneled through one sole company that splits profits and pays the members of the band.

However, Fehn claims he recently discovered that his bandmates have set up several other SLIPKNOT-affiliated business entities in different states that appear to be collecting money from the band. Fehn says he was unaware of these companies, and claims to have never received a dime from them. He specifically accuses band leaders Taylor and Shawn "Clown" Crahan of shady business dealings.

Fehn wants a full forensic accounting done on SLIPKNOT's companies and assets, and intends to collect the damages and profits he believes he is owed.

This morning, SLIPKNOT released a statement confirming that Fehn was no longer a member of the band. The group added that it was "disappointed that [Fehn] chose to point fingers and manufacture claims, rather than doing what was necessary to continue to be a part of SLIPKNOT."

Known for wearing a Pinocchio-style mask, Fehn has performed with SLIPKNOT since 1998 and appears on all the band's albums.

Fuck I would LOVE that https://t.co/U4AJzYTleO

You think that’s dickish, try being wrongfully accused of stealing money from someone you cared about, and having a lot of your fans believe it.
Good Morning, by the way.