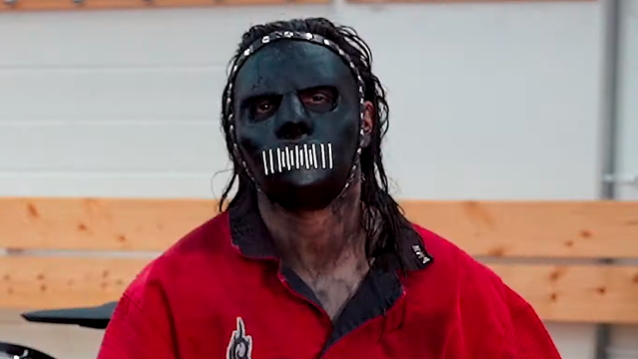 In a new interview with Finland's Kaaos TV, SLIPKNOT's Jay Weinberg was asked about being named winner of last year's Music Radar poll for "Best Metal Drummer". Jay earned almost twice as many votes as the rest of the entrants combined, a list which included such names as Paul Bostaph (SLAYER),Ray Luzier (KORN),Jocke Wallgren (AMON AMARTH),Art Cruz (LAMB OF GOD) and Chris Kontos (MACHINE HEAD).

"It's very flattering, and I'm honored to receive any kind of recognition like that," the 29-year-old musician told Kaaos TV (see video below). "I'm grateful that people choose to spend time with our music and take notice of whatever contribution I've given to our music, the collective of SLIPKNOT. That means a lot to me.

"Music is so subjective, and somebody's favorite drummer is somebody else's… I don't know," he continued. "With anything subjective like that, I'm very appreciative of it, but, to me, what I'm most honored by is that people choose to interact with the music in some way and let it into their lives and come out to the shows. That, to me, is the real concrete… you know, that's what that means. I'm honored, I'm flattered, but the work continues every day. It's not really something that I think about every day. I'm appreciative that people interact with our music. That's pretty much the main point."

SLIPKNOT is continuing to tour in support of its sixth studio album, "We Are Not Your Kind", which was released last August via Roadrunner Records.