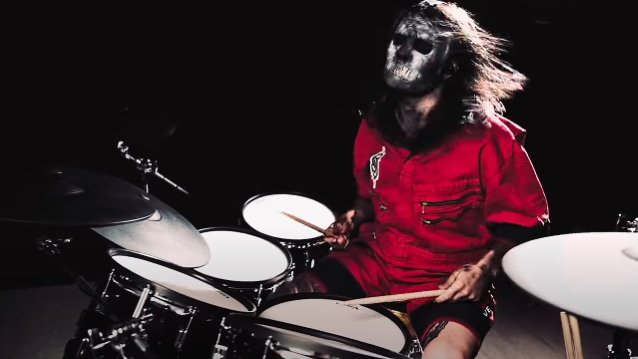 Jay Weinberg, drummer with band SLIPKNOT, has to keep his drumming and physical fitness in top shape. Touring with SLIPKNOT is the drumming equivalent of being asked to run a marathon, night after night. Playing a show this demanding without a warmup can lead to injuries, which could be game over for the tour. That's why Jay chooses to take his Roland V-Drums on tour — so that he can maintain tour-readiness and warm-up before every live show. Having a V-Drums kit on-hand is also useful for helping Jay and the band pen new songs and easily capture demo tracks on tour.

In the video below, Weinberg plays along with a well-known favorite, using the V-Drums Acoustic Design VAD506 kit. Jay plays the SLIPKNOT song "Nero Forte", with original drum track removed, from SD card inserted into the TD-27 module. The audio from the TD-27 module provides the drum sounds and are mixed with the SLIPKNOT track.

Jay's custom setup uses two VAD506 kits, combined together, to exactly model his acoustic kit setup as played on stage with SLIPKNOT. Two TD-27 modules are tethered together to provide inputs for all pads within the kit. Drum audio is recorded directly from the TD-27 modules into a DAW. Mixing and panning completed in post-production, maintaining the authenticity of the TD-27 module sound.

The video and audio was recorded backstage at a SLIPKNOT concert on January 24, 2020 in Birmingham, U.K.