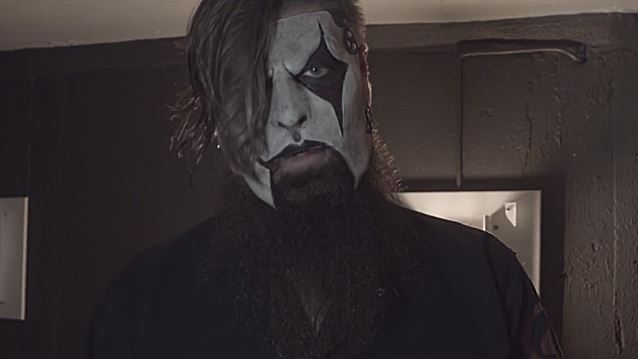 Sweden's RockSverige.se recently conducted an interview with SLIPKNOT guitarist Jim Root. You can now watch the chat below.

Asked what album got him hooked on heavy metal in the first place, Root responded: "I would have to say my first taste of 'real' metal that made me really start to look outside of what… [When you come] from Des Moines, Iowa, it's hard to find stuff there, and at that time, there was no Internet, there wasn't… You had to really fucking search for stuff. So unless you knew somebody at a record shop that was very into it and could suggest things to you, it was word of mouth and friends. And, for me, it was probably 'Ride The Lightning' by METALLICA. 'Cause up to that point, the only thing I listened to was, like, [MÖTLEY CRÜE's] 'Shout At The Devil'. You've got this [very straightforward, simple] kind of beat going. One guitar player… I was very into guitar, so anything that was guitar-oriented… unless it was my parents' music. You know, like listening to YES or LED ZEPPELIN or THE WHO or whatever. I heard 'Ride The Lightning' — a friend of mine played it for me — and as soon as I heard Lars [Ulrich] playing like that and what the guitars were doing over it, with James [Hetfield] and Kirk [Hammett], I was, like, 'What the fuck is this?' You know what I mean?! And then that opens your mind to all this other stuff. And then those bands… you learn more about those bands and you see where they got [their sound from]… like DIAMOND HEAD and BUDGIE and all that shit. It's reciprocal and I think more of that needs to happen today. People need to go back and figure out why it is that SLIPKNOT plays the way it is. That way, maybe, you know, maybe every band doesn't start sounding the same anymore."

As previously reported, SLIPKNOT guitarist Mick Thomson was stabbed in the head during a knife fight with his brother on Wednesday morning (March 11) at Thomson's Clive, Iowa home, according to The Des Moines Register.

According to police, the altercation between the 41-year-old Mick and his 35-year-old brother Andrew started inside Mick's home and spilled into the front yard about 4:25 a.m., where it became physical.

When officers arrived, the two men appeared to be intoxicated and had sustained serious but non-life-threatening injuries, with Mick suffering a stab wound to the back of his head.

Both men were transported to local hospitals in separate ambulances but no charges had been filed at press time.

SLIPKNOT just got back from a stint on Australia's Soundwave festival tour and will launch a spring U.S. trek on April 25 in Fort Myers, Florida, ending on May 16 in Grand Rapids, Michigan.