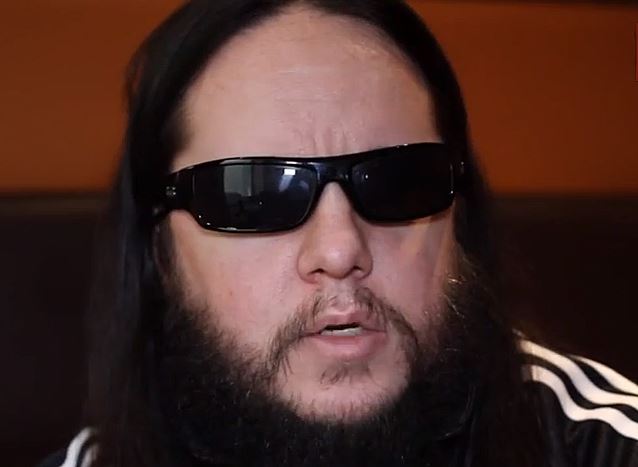 Joey Jordison recently spoke to U.K.'s Metal Hammer magazine about how he put together his latest project, SCAR THE MARTYR, during down time from his day job in SLIPKNOT. You can watch the chat below.

The self-titled debut album from SCAR THE MARTYR is available for streaming in its entirety at relics.scarthemartyr.com. The CD will be released on October 1 via Roadrunner Records.

Recorded at Sound Farm Studios in Des Moines, Iowa, SCAR THE MARTYR's album was helmed by Rhys Fulber, whose production and mixing credits include FEAR FACTORY, ROB ZOMBIE, MINDLESS SELF INDULGENCE, FRONT LINE ASSEMBLY and more. The CD was written by Joey and lead vocalist Henry Derek Bonner (BLOOD PROMISE),and joining them in the studio were keyboardist Chris Vrenna (NINE INCH NAILS),as well as Simon and Norris, who collectively handled all lead guitars on the album.

SCAR THE MARTYR was recently on the road as the support act for DANZIG on a North American tour which also included performances by former MISFITS guitarist Doyle Wolfgang Von Frankenstein and HUNTRESS. The trek kicked off August 9 at Sound Academy in Toronto, Ontario, Canada and wrapped up on August 31 at Tempe, Arizona's Marquee Theatre.

"With this project, I focused my efforts on writing for the better of the song," said Jordison. "I wasn't worried about flash or persona... It's all about writing a good solid song. I'm writing music that people can grasp and hold on to...something that resonates. If you don't have that, then you have nothing."

SCAR THE MARTYR will support ALICE IN CHAINS on their U.K. tour in November.