Knotfest, the music and lifestyle phenomenon created by multi-platinum, genre-defining metal band SLIPKNOT, has today announced the full lineups for its events in Mexico on November 30 and Colombia on December 6. SLIPKNOT will be headlining both events in support of its new album, "We Are Not Your Kind", which debuted at No. 1 in ten countries when it was released last month.

This year Knotfest Mexico will take place at Parque Deportivo Oceania and will mark SLIPKNOT's first ever performance in Mexico City. Another first for Knotfest Mexico this year is their new partnership with Forcefest as the two festival brands combine to create an epic weekend of heavy music at Knotfest x Forcefest.

Bands joining headliners SLIPKNOT for Knotfest Mexico on Saturday, November 30 include EVANESCENCE, GODSMACK, BEHEMOTH, BULLET FOR MY VALENTINE, PAPA ROACH, 311, CARCASS, SUICIDAL TENDENCIES, STRATOVARIUS, NOTHING MORE and OF MICE & MEN. Forcefest, taking place on Sunday, December 1, will be headlined by Rob Zombie who will be joined by W.A.S.P., IN FLAMES, SAXON, ACCEPT, TESTAMENT, EXODUS, GHOSTEMANE and more (full lineup in poster below).

The inaugural Knotfest Colombia last year was a huge, sell-out success. This year is shaping up to be even bigger and better when Knotfest Colombia descends on Hipódromo De Los Andes in Bogotá on December 6. SLIPKNOT will headline the event for the first time and will be joined by a stellar line-up including BEHEMOTH, TESTAMENT, SAXON, ACCEPT, W.A.S.P., UNLEASHED, STRATOVARIUS, A.N.I.M.A.L. and more (full lineup below). Tickets are on pre-sale now and will go on general sale on Thursday, September 5 at 9 a.m. (local).

Both Knotfest events will also feature special performances from rock 'n' roll entertainment group THE CHERRY BOMBS, whose explosive show includes dance, aerial arts, fire arts, pole dancing, singing, hooping and grinding and is an experience not to be missed.

SLIPKNOT has been on the road since the end of July as its first-ever "Knotfest Roadshow" tour hit thirty cities across North America. With a brand new stage set and production, and special guests VOLBEAT, GOJIRA and BEHEMOTH, the tour has seen SLIPKNOT playing to the biggest North American audiences in their history. This fall, SLIPKNOT will headline U.S. festivals Louder Than Life and Aftershock, and then perform with METALLICA across Australia and New Zealand. SLIPKNOT then return to Europe in January 2020, where many of the shows sold out in a matter of hours. 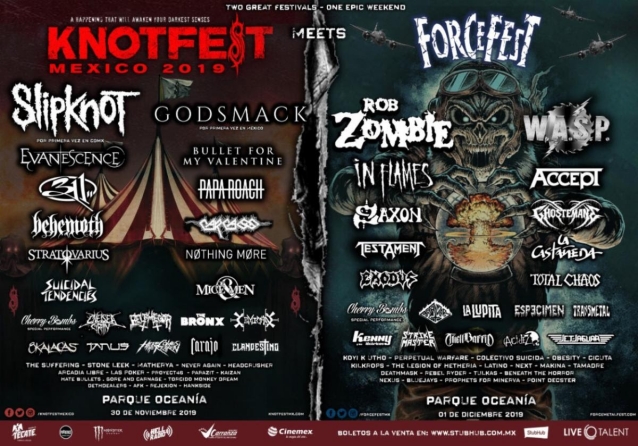 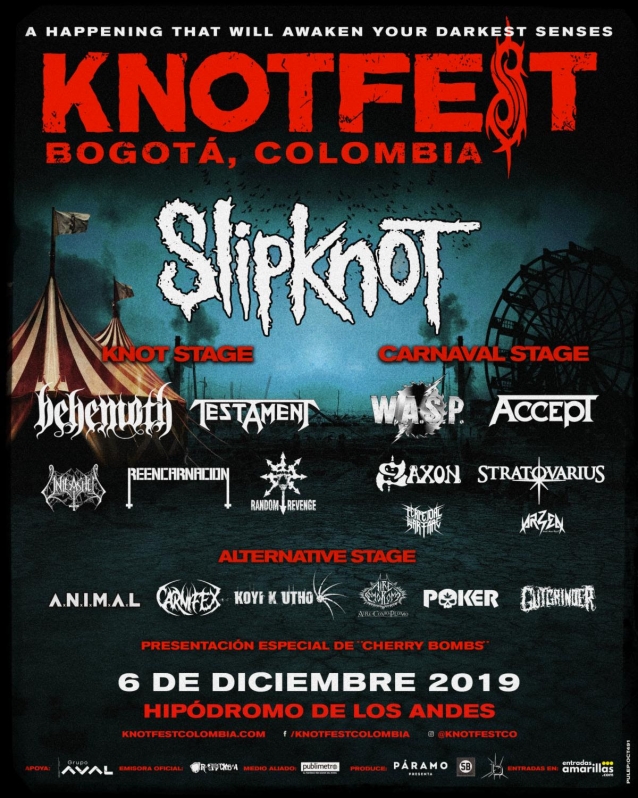