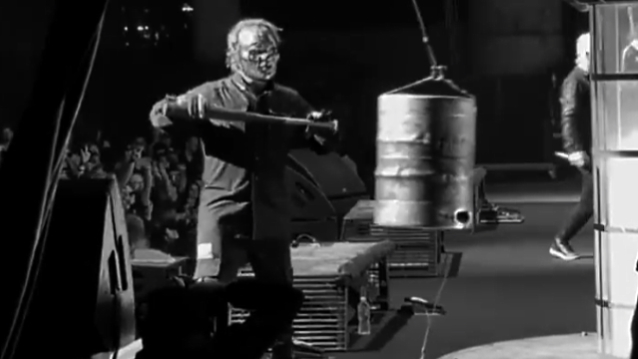 SLIPKNOT percussionist M. Shawn Crahan (a.k.a. Clown) tore a bicep tendon during the band's November 5 concert at Knotfest Los Angeles. As a result of his injury, Crahan was forced to miss the band's performance at the Welcome To Rockville festival Thursday night (November 11).

Crahan explained his Welcome To Rockville absence in a social media post earlier today. He shared a clip of SLIPKNOT's Knotfest Los Angeles appearance and he included the following message: "Ladies and gentlemen, if you look close enough you can pinpoint the exact frame where clown completely tore the bicep tendon from the radial tuberosity with proximal retraction, proximal to the coronoid fossa of the humerus.

"With that being said, you may have realized I was not on stage in Florida with my brothers and my culture tonight. For this fact I am saddened.

"I had surgery today in Los Angeles, everything went great and I am recovering peacefully.

"I can't express how happy and blessed I am to have been able to come back to touring after all that we as a community have been through the last couple years. And I promise we will see you all very soon. Thank you."

In a 2012 interview with LA Weekly, Crahan said that he is "always injuring" himself while performing with SLIPKNOT. "I don't know if it's because I'm a klutz or an idiot, I don't know," he said. "I treat every show like it's the last. Since the beginning, every show we've told ourselves that this could be the last. My kids know that if I die on stage, that's where I should have gone. I don't want to, though. I want to live for a very long time. I'd like to retire and leave on a good note."

SLIPKNOT performed its new single, "The Chapeltown Rag", live for the first time ever at Knotfest Los Angeles. The event was livestreamed as it happened, giving fans access to both the studio version and SLIPKNOT's live performance of "The Chapeltown Rag" within only hours of its premiere.

The studio version of "The Chapeltown Rag", which was released that same day, was produced by Joe Barresi, who has previously worked with AVENGED SEVENFOLD, QUEENS OF THE STONE AGE and CHEVELLE, among many others.