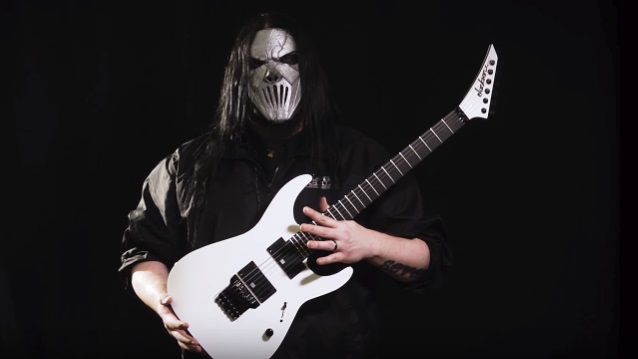 SLIPKNOT guitarist Mick Thomson spoke with the Jackson crew about his ferocious, new USA and Pro Series Signature Soloist models. The savage shredder knows what he likes in his guitars and was extremely hands-on with the development process, making sure that every detail lived up to his expectations.

One of metal's most successful and revered players, Thomson's game changing, take-no-prisoners approach to metal guitar has influenced countless musicians worldwide, while his black hole-heavy de-tuned guitar sound has been an integral part of SLIPKNOT for more than two decades.

At last month's NAMM show in Anaheim, California, Thomson spoke to Thomann Music about his relationship with Jackson. "I was with B.C. Rich for a few years, but Bernie [Rico] Sr. died right when I first got with them," he said. "And my first two guitars were made with Bernie Sr., and that happened, and it really, obviously, put a damper on… how are you the same? But Bernie Jr. took over and he was doing his thing for a while, and things just changed and it just wasn't the same anymore. The company changed hands to a totally different company, so you see the guirar, but it's not even the Rico family anymore. People are always, like, 'You should never have left.' I'm, like, 'You don't know all the ins and outs of all the stuff that happens.' And I love 'em, and I still love 'em, and the guitars that they made for me are amazing; I still play 'em at home. They might pop in on tracks once in a while. It just depends on the right tool for the job, whatever. And Ibanez — nothing against them; they made some great stuff. I was there 13 years. But I'd always kind of thought, 'What if I would have just done Jackson off the bat anyway?' Because that was my baby, that was my guitar, but I just got talking to… I met the guys from B.C. Rich and they got some stuff to me and I was super impressed, and that was just kind of the way we went. 'Cause those guys were awesome. Opportunities come up. You're young and someone throws you some really well-made guitars, and you're, like, 'Dude, I'll take it.'"

For more information and to find a dealer near you, visit www.jacksonguitars.com.