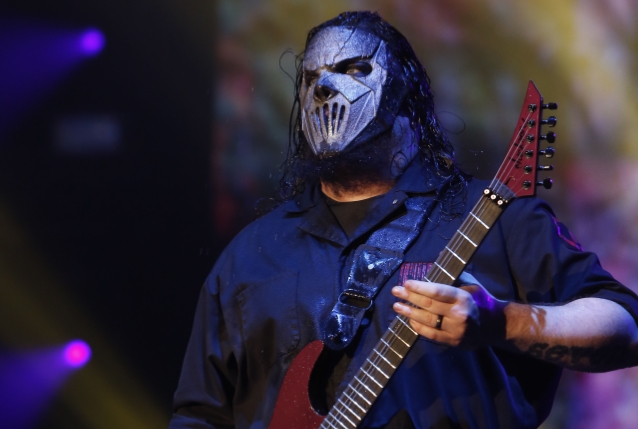 Released in 1991, the so-called "Black Album" represented a shift toward a slower, more melodic, and more commercial heavy-metal sound, with many of METALLICA's hardcore fans believing that radio-friendly hard-rock anthems like "Enter Sandman", "The Unforgiven" and "Nothing Else Matters" betrayed the thrash metal roots of the band's first four albums.

Although METALLICA had scored its first radio and video airplay with its previous effort, 1988's "...And Justice For All", "Metallica" was the band's biggest breakthrough, producing five singles and making them into one of the most popular rock acts in the world.

Thomson told Metal Hammer magazine that his initial impression of "The Black Album" was not a positive one.

"I understand now that I'm in a band that you have to stop repeating yourself or you'll be bored, but I loved those first four albums so much and I was horrified when I heard 'The Black Album,'" he said. "I felt insulted and didn't listen to them for years, but that's over now. Are there similarities to how SLIPKNOT have changed? I don't think so. And besides, I certainly never cut my fucking hair."

METALLICA drummer Lars Ulrich addressed the "Metallica" album's musical shift in a 1991 interview with Rolling Stone. "We felt inadequate as musicians and as songwriters [early in our career]," he said. "That made us go too far, around 'Master Of Puppets' and on '...And Justice For All', in the direction of trying to prove ourselves. We'd do all this weird-ass shit sideways to prove that we are capable musicians and songwriters."

Ulrich said about Rock in NME: "We'd never really had anybody push us before… We've always thought of ourselves as 'big bad METALLICA,' but Bob taught us a new word none of us had ever heard before: soulful."

METALLICA performed "The Black Album" in its entirety at a number of European festivals in 2012.

In 2014, "Metallica" became the first album to sell 16 million copies since Nielsen SoundScan started tracking sales in 1991. To date, it has shifted almost 17 million units in the U.S.