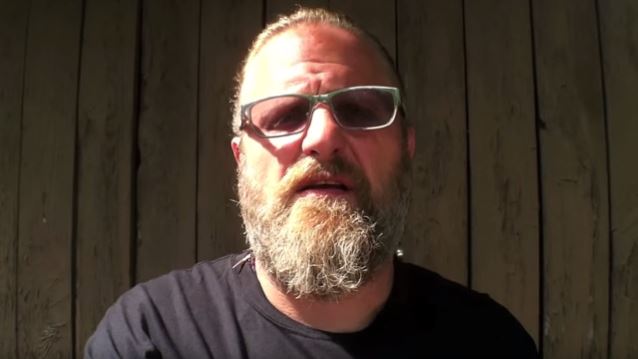 SLIPKNOT's M. Shawn Crahan spoke to Tommy Carroll of the 103.9 The Bear radio station in South Bend, Indiana about "Officer Downe", the forthcoming film directed by Crahan, which is tentatively due next June.

The movie stars Canadian actor Kim Coates — who is best known for playing Tig Trager on the FX series "Sons Of Anarchy" — as an L.A. supercop who is killed in the line of duty but who is repeatedly resurrected and sent back onto the streets. "Officer Downe" is based on the "Man Of Action" imprint/Image Comics graphic novel written by Joe Casey — who also penned the film's screenplay — and illustrated by Chris Burnham.

Said Crahan: "I'm working with a great, great bunch of people. Joe Casey wrote the comic. I'm working with Skip Williamson and Mark Neveldine, who created the 'Crank' series; they're mentoring over me."

He continued: "I got to make my first motion picture. It was PhD in six weeks. I made a Hollywood movie that is going to look like a very, very expensive movie. And I did in twenty-one days. Eighteen-hour days for six weeks; the hardest artwork I've ever done in my life. It's awesome."

Crahan went on to say: "It's seriously… I burned out, man. I gave all I've got. The aesthetic and the stylized vision, I think, people are gonna be… Hopefully it's a breath of fresh air for everybody, 'cause I'm coming real different. I'm giving everybody something that's a little extreme on the art, but nothing that you can't grab a hold of, nothing where I'm, like… I lose you. Where you're just, like, 'Clown, you're taking too much artistic liberties to screw us all over.' I'm putting it in the pocket for everyone to enjoy."

Crahan said that he has his sights set on more film directing in the future. "I've got dreams now of reinventing 'Hellraiser' and just getting my head on anything I can get my hands on that maybe I would love," he revealed. "'Cause the possibilities are endless: I can make my own movies, I can make other people's movies. But if someone had a 'Hellraiser' script and had funding and I loved it, let's go."

Crahan told The Pulse of Radio a while back that he's been working his way toward directing a feature for a long time. "I've been preparing myself with art my whole life, and preparing myself for directing and scriptwriting, and this is what I've been doing for 10 years, is learning and studying and taking it in," he said. "You know, I honestly believe that, you know, we are gonna create the next 'Clockwork Orange' and I'm gonna die trying because that's my life."

Crahan has directed a number of music videos, concert DVDs and behind-the-scenes featurettes for SLIPKNOT.

He and SLIPKNOT singer Corey Taylor founded a film production company called Living Breathing Films in 2012, although it has yet to release anything.

Taylor recently made his acting debut in the horror movie "Fear Clinic", which was released on home video in February.