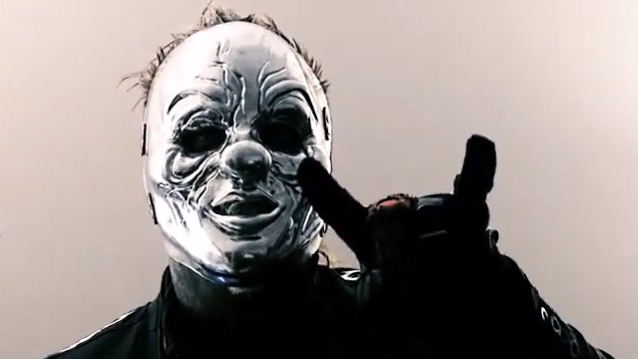 SLIPKNOT percussionist Shawn "Clown" Crahan says that a set of 11 previously unreleased songs recorded by four members of the band during the sessions for its 2008 LP "All Hope Is Gone" will arrive at some point during the "We Are Not Your Kind" touring cycle.

While speaking to NME at the London launch of SLIPKNOT's Number Nine whiskey, Crahan stated about plans to issue the unreleased material (see video below): "'Look Outside Your Window' is a very unique art piece on its own. So it's sort of timeless, in my opinion. And so I try not to worry about it too much. It feels like I've waited for this long for it to be right, and it just never has… Like, we were gonna release it way early on this cycle, but this takes precedence, and that's not supposed to be confused. It's just a piece of the puzzle. It's not supposed to be watered down or marketed, really. It's really a piece of the imagination that's missing that people might really need. So, hopefully on this cycle somewhere. It was scheduled for Christmas. I just quit asking, because I don't want it to interfere with this. And mainly because of what it is. It needs its own space. And we are having a good time enjoying this album, and we have no ego with that. We're not trying to make that corporate or whatever; it's really just beautiful art that we wanna share in the right way. So it's gonna be on this album cycle at some point. And like everything we're doing right now, it's just gonna come out, and people won't even know. It'll just be this thing that happens. I'm looking forward to that, though. I think people will really enjoy it."

One of the songs from "Look Outside Your Window", "'Til We Die", surfaced on the digipak of "All Hope Is Gone", but the rest have yet to see the light of day.

Last year, Taylor described the material on "Look Outside Your Window" to SiriusXM's "Trunk Nation" as "experimental," "super vibey" and "super melodic." He added: "There's something about those songs. They're very solemn, very energetic, very artistic. For people who are used to a certain way of SLIPKNOT sounding, this doesn't sound anything like that. It's much more of a rock vibe. Honestly, it's much more of a RADIOHEAD vibe, to be honest."

According to Taylor, the music that was recorded for "Look Outside Your Window" was originally supposed to be released simultaneously with the "All Hope Is Gone" tracks, but the plan never quite came together.

"Man, I tried like hell to make those two worlds come together — 'All Hope Is Gone' and 'Look Outside Your Window' — to the point where I was taking songs from both and kind of putting them together, like arrangement, sequencing," Corey told "Trunk Nation". "I had two different versions of 'All Hope Is Gone' that I had put together with songs from that. And just honestly, because of the emotional rifts that were in the band, the turmoil that was going on, nobody wanted to try and make that work. So what we ended up with was 'All Hope Is Gone' and then this unreleased album, which we've been trying to find a way to release this for a really long time."