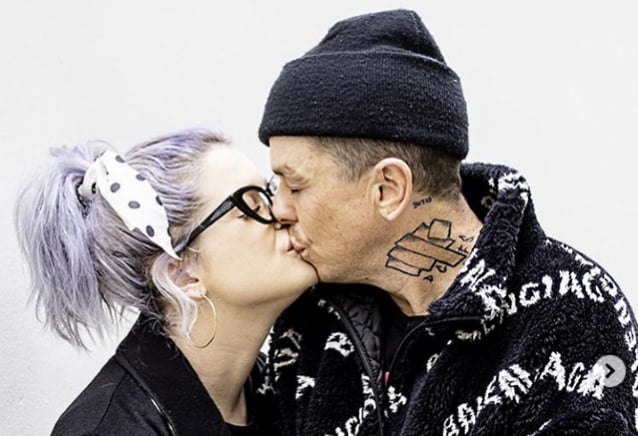 Sid Wilson, the mask-wearing turntablist for SLIPKNOT, and Kelly Osbourne, the 37-year-old daughter of Ozzy and Sharon Osbourne, held a baby shower for their first child together on Sunday (October 9) in Los Angeles.

Sid's SLIPKNOT bandmate Jay Weinberg shared a photo of the two musicians at the event, and he captioned it: "So proud of & happy for my bro @sidthe3rd and @kellyosbourne! Congratulations you two; you're gonna be awesome parents!"

Earlier this month, Kelly revealed that she and Sid are expecting a son. The mom-to-be told Entertainment Tonight that Ozzy was excited that to finally be getting his first grandson, since Kelly's brother Jack Osbourne, 36, has four daughters.

"I mean, he's told everyone the gender of my baby before I ever got the chance to, and I'm just like, 'Aww, Dad, come on. Like, come on," Kelly said. "But I will say, every single day he does this little song and this little dance about how excited he is, and he is so excited that it's a boy. It's the first — out of me and my brother, it's the first boy, so, he's like planning all these things."

Osbourne said that she's "really excited" to become a mom and she praised her parents for their "incredible" support throughout her pregnancy since Wilson has been away on tour. "Every milestone I've kinda gone through with my dad, and he's been great, even though he sometimes says the wrong thing," Kelly added. "I'll walk into the room and he'll go, 'Wow, you're big.' and I'm like, 'Thanks, Dad.'"

Two months ago, Sid, 45, said that he doesn't mind the media attention he has been receiving after it was revealed that he and Kelly are expecting their first child together. "I don't know. It doesn't bother me at all," Sid told Knotfest. "It's just part of my life. I love her to death. It's just the path I'm meant to be on, so there's no awkwardness about anything like that. It's like it was just always happening. [Laughs]"

This past February, Kelly said that she was "deeply in love" with Wilson. For Valentine's Day, Kelly shared several photos on Instagram of her and Wilson, and she captioned the post: "After 23 years of friendship I can't believe where we have ended up! You are my best friend, my soulmate and I am so deeply in love with you Sidney George Wilson."

Kelly split from her cinematographer boyfriend Erik Bragg in October 2021 after one year together.