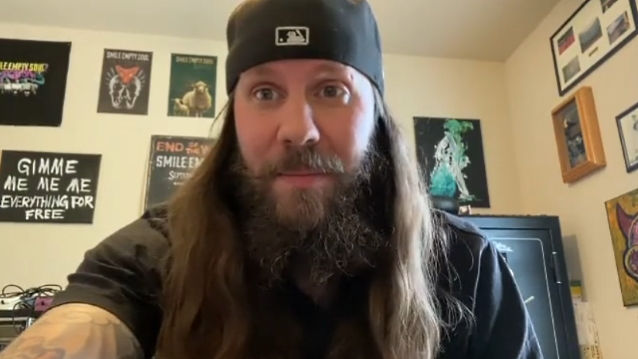 SMILE EMPTY SOUL Frontman Refuses To Play Venues Where Vaccines Are Required, Says 'Medical Freedom' Is Important To Him

California hard rock band SMILE EMPTY SOUL has announced plans to cancel "a couple" of its previously booked shows because the concert venues in question are requiring a COVID-19 vaccine for fans. A number of bars and clubs have adopted the new protocol because the owners say the music industry and the artists demand a safe environment to perform.

On Wednesday (August 25),SMILE EMPTY SOUL guitarist and lead singer Sean Danielsen released the following statement via social media: "Hey guys, I just wanted to let you know that we will be canceling a couple of shows here and there moving forward due to vaccine requirement rules.

"I stand 100% for freedom, and medical freedom is especially important to me. I believe that you should get the vaccine if you want it, but should not have to if you don't want it.

"I don't think for a second that my tiny little band can make a difference in these weird times, but I don't want to be the reason that even 1 person gets a medical procedure they don't feel comfortable with....... especially when the accepted science says that the vaccine doesn't prevent transmission of the virus, and it even appears vaccinated people are carrying a higher viral load than those that are not.

"Why punish a particular demographic of the population when there's not even a health benefit from doing so?....... it's unamerican in more ways than I can count, and people that get off on punishing others just because they don't believe the same things need to take a long hard look in the mirror.

"I'm sorry to anyone disappointed by one of these cancelations..... it's not what we want, and definitely not something we can afford doing, but some things matter more than money, and I am not the type to sell out what I believe in for a buck.

"I'm sure I will get a bunch of weird hate from cyber bullies everywhere for this post, but I feel like a lot of you are too wrapped up in fear to see that freedoms are being removed from our society right now, and once freedom goes, it's gone for good.

"I want more than anything for my daughter to grow up with the same freedoms that I've enjoyed, and the world is changing rapidly in a way that doesn't look good for us, or the next generations.

"I encourage all of you, vaccinated or not, to realize that the right of the individual to choose what happens to their own body, is something much bigger than this one situation....... and the things that happen now will set a precedent for the future moving forward. Give tyrants the ability to take power during an emergency, and they will create emergencies to take power. I encourage everyone out there to stand for freedom above all else, no matter where you are on the issue of this vaccine.

"I will not be engaging in any argumentative comments left on this post as I have said what I needed to say, and am not looking for conflict.

"I keep my opinions to myself on here almost 100% of the time because of how confrontational people are these days, but I wanted to explain why some of these shows will be dropping off our schedule in the future. So far there are only a couple shows in Oct that are effected, but I expect more of our fall shows to follow....... we shall see, and I will keep you updated".

Earlier in the month, Live Nation Entertainment, one of the country's largest concert and ticketing companies, announced that it will require all artists and concertgoers to show proof of vaccination or a negative COVID-19 test starting in early October.

Live Nation's announcement came one day after AEG Presents said that it will be requiring proof of vaccination for entry into its owned and operated clubs, theaters and festivals. The decision was made on the heels of the dramatic surge in COVID-19 cases as the delta variant spreads throughout the United States.

A recent study found that people who contract the delta variant of COVID-19 after being fully vaccinated carry a similar amount of the coronavirus as those who catch the disease and have not been inoculated. But the researchers stressed that vaccination still offers good protection against catching the disease in the first place, and protects against getting seriously ill with it.

Hey guys, I just wanted to let you know that we will be canceling a couple of shows here and there moving forward due to...