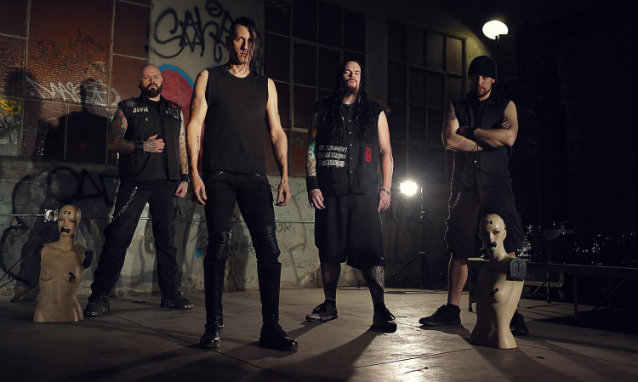 After playing a series of live shows throughout 2013, SOCIETY 1 felt it had polished enough new material to head back into the studio to record an EP titled "Rise From The Dead".

"There is no better way of getting new material together than to develop it live in front of a crowd. The songs grow and develop a life that can only happen through that experience. Besides it felt great getting back out there and play primarily new stuff. Everything was reborn and exciting," said vocalist Lord Zane.

Helming the new EP is an up-and-coming producer Alex Crescioni, someone that is said to be "connected to the Los Angeles scene with fresh ears."

"Alex is younger than all of us and is also in his own band called DIMINISHED 7 that has been part of the L.A. scene now for years," said Zane. "He's not up in the hills overlooking Hollywood like a spoiled hotshot and has done everything he can to produce as many acts as possible to hone his skills. I heard some of his work and was impressed. I liked that he is in the middle of all the chaos and hunger amongst the current crop of local acts. That kind of immersion into the scene affects you in a way that can't be duplicated. I'm hoping he brings that energy to the recording process."

SOCIETY 1 plan on releasing the EP through singles, with the first one, entitled "It's Yours Now", coming as soon as February 2014. A video and more tour dates will follow.