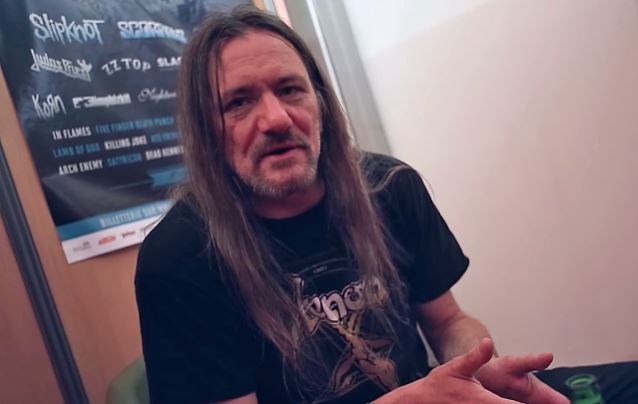 SODOM Has 'Seven Or Eight Songs' Written For Next Album

On June 19, Metal Maniac video magazine conducted an interview with Thomas "Angelripper" Such, bassist/vocalist of veteran German thrashers SODOM, at Hellfest in Clisson, France. You can now watch the chat below.

Speaking about SODOM's plans to record a new studio album, Angelripper said: "We have already a lot of good [new] songs [written] together — like, I think, seven or eight songs. And at this time we're working [on] pre-production. For this album, there's really something special. We don't have any pressure; we don't have any dictation from a record company: 'Bring it out now.' I told the record company, 'We'll do the pre-production and then we can talk about a release.' But I think it's gonna be April or May of next year."

He continued: "This album will be definitely the most old-school and heaviest SODOM album ever. Because we produce it ourselves. We don't have any big producer. Like, [former SODOM collaborator] Waldemar Sorychta is a good producer, but we have so much own ideas to bring to the table. It's going really [back] to the old days of SODOM."

SODOM's latest album, "Epitome Of Torture", was made available on April 29, 2013 in Europe and May 7, 2013 in North America via SPV/Steamhammer. Angelripper, guitarist Bernd "Bernemann" Kost and new drummer Markus "Makka" Freiwald recorded a total of twelve new tracks (plus a MOTÖRHEAD cover) which "present SODOM as more diverse and multi-faceted than ever," according to a press release.

SODOM released a new EP, "Sacred Warpath", in November 2014 via SPV/Steamhammer. The effort was made available on CD, 10-inch clear vinyl (limited to 1,000 copies) and as a digital download.