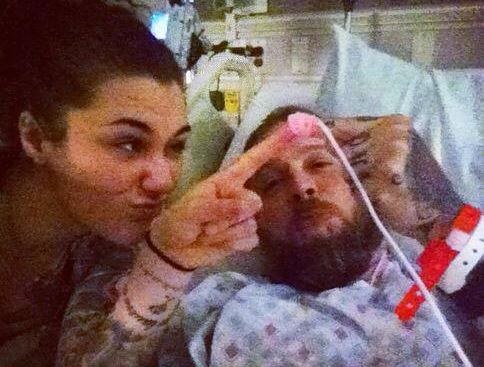 SOIL/ex-DROWNING POOL frontman Ryan McCombs is recovering in a hospital after suffering a stroke this past weekend.

McCombs wrote on his Facebook page: "I have been hospitalized after having a stroke in my sleep Sunday night.

"Thanks to Izzi [Ryan's girlfriend] making me go to the hospital Monday morning we caught it before my stupid brain made to much of a mess of me.. I'm already doing better but I'm warned it'll be a bit of a road.

"The Angry Hobbit is a stubborn prick and I believe shit will right itself in no time. I mean, hell, my stupid dumb right hand only made me take 15 minutes to write this...lol seriously. That's whooping the horse's booty from just last night.

"In great hands here and Izzi is keeping a protective eye."

SOIL has just completed a European tour with (HED)P.E. and AMERICAN HEAD CHARGE.

The band's sixth studio album, "Whole", was released on August 20, 2013 via Pavement Entertainment.

"Whole" is the first SOIL album with McCombs since 2004's "Re.De.Fine" (after which he joined DROWNING POOL). It sees SOIL returning to its classic sound that fans have come to admire, with a pres release calling it the CD "that could have come directly after the 'Scars' album in 2001."