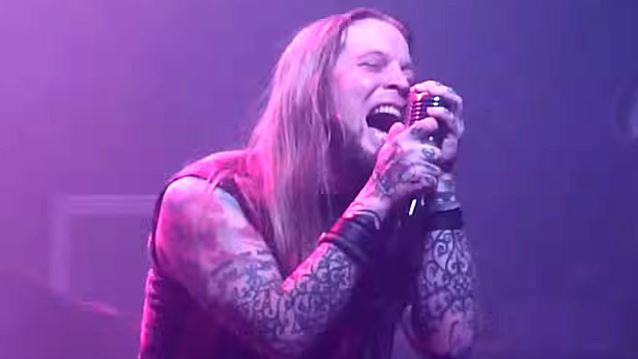 Former DROWNING POOL and current SOIL frontman Ryan McCombs was interviewed last month on the 94.9 K-Rock (WRHK) radio station in Danville, Illinois. You can now listen to the chat using the audio player below.

Speaking about his health three months after he suffered a stroke following the completion of SOIL's European tour with (HED)P.E. and AMERICAN HEAD CHARGE, McCombs said: "My health was absolutely horrible. It was bad. I knew it was bad. It was one of those things where you have a bunch of crap that runs in your family and you play that thing, the ostrich game, where if you just ignore it, you think it might go away. But funny enough, that just doesn't work. It was an eye opener for me, and luckily… All the doctors [were] scratching their heads how I sat there having a stroke for the better part of ten hours before I finally [said], 'You know, this ain't right,' and went to the hospital. They really didn't understand why my brain wasn't mush, or why I wasn't a lot more affected, or long term, and I just made such a quick… [I am] still in the process of recovering, but [I am] so blessed in the speed at which I've regained certain functions, and that I'm even sitting here looking at shows next month and then continuing on my career; you know, blessed that way."

Asked if he knew he was suffering a stroke, McCombs said: "I had no idea. I just got done spending… a flight from England to Chicago, and then sitting in Chicago and stuffing my face with Chicago food, which will kill anybody. And then I jumped on a flight from Chicago to Louisville, and I got home, like, at 6-something p.m. I was tired. I don't sleep on flights; I'm afraid I'll miss a Britney Spears movie or something. I got home and I was just exhausted. I went to bed. I probably fell asleep, I think, about 11 p.m. and woke up at 1 a.m. and got out of bed. Then it just wasn't working. My right leg seemed weird; it wasn't really reacting right. My right hand seemed odd. I went back to bed, just 'cause I was exhausted, and woke up maybe one hour later, and this time when I went to stand up, I just fell right into the dresser; stuff just wasn't working at all. But I'm an idiot, and I went back to bed. I convinced myself that things were cool. It wasn't until I woke up at, like, 7 a.m. that things were just numb, and I couldn't feel my right hand and my right leg. I started talking to different people in the medical business that I know, and basically everybody was telling me, 'Go to the hospital.' Eventually, about 10 a.m. I just went, and I was there… They took me right in, bypassed the waiting room, and they just took me right in."

"Whole" is the first SOIL album with McCombs since 2004's "Re.De.Fine" (after which he joined DROWNING POOL). It sees SOIL returning to its classic sound that fans have come to admire, with a pres release calling it the CD "that could have come directly after the 'Scars' album in 2001."