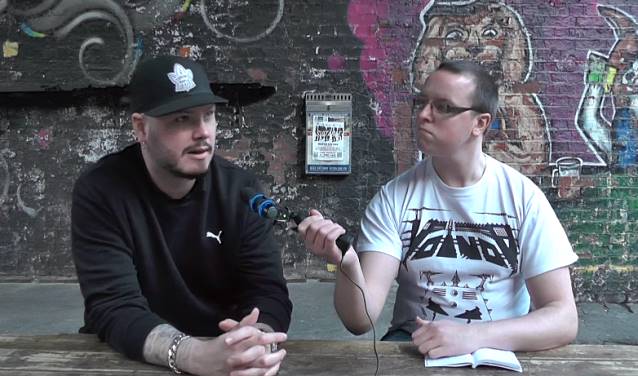 GetYourRockOut conducted an interview with vocalist Björn "Speed" Strid of Swedish metallers SOILWORK before the band's March 12 concert in Manchester, England. You can now watch the chat below.

Asked about SOILWORK drummer Dirk Verbeuren's absence from the first few shows of the band's current European tour, Strid said: "Basically, [Dirk] pulled a few muscles right here [points to left side of his torso] and he was in great pain and couldn't even move for two days. So we had to ask Peter [Wildoer] from DARKANE to try to fill in. So [Peter has] only been rehearsing for one day and then we did a show last night in Bristol with him behind the drums. And it went pretty good. But before that, we were not able to rehearse as a band, so I was really impressed how he handled the whole thing. And we stuck it through. And I'm sure it's gonna sound even better today. So… What can we do? You know…"

He added: "[Peter has] been playing with us before, so he knows some of the songs. He likes our work, for sure. I guess it's easier when you know the songs. We're lucky that he's on the tour. There's only a few drummers in the world that could pull it off, so we're really grateful.

"Dirk is still [with us on tour], and we hope he will get better, but for now Peter is filling in. And we'd rather still play than just having to cancel all the shows. And I think the fans are still gonna appreciate it." (Note: Dirk has since resumed playing drums for SOILWORK on the current tour.)

As previously reported, Dutch singer Floor Jansen (NIGHTWISH, REVAMP) will join SOILWORK on stage on March 21 at Circus in Helsinki, Finland. The concert will be filmed for SOILWORK's first-ever live DVD, to be released later in the year.

Performance (March 17 at Bibelot in Dordrecht, The Netherlands):