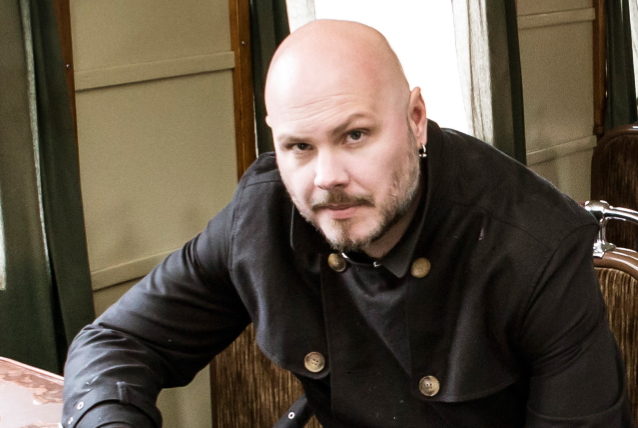 SOILWORK vocalist Björn "Speed" Strid has commented on Sweden's controversial handling of the coronavirus. Unlike most of the developed world, including neighboring Norway or Denmark, Sweden left schools, bars, cafes and restaurants open to the public. Social distancing remains, for the most part, voluntary, provided the group in question has fewer than 50 people.

Swedish authorities argued that a mandatory lockdown is not sustainable, and their decision to refuse coronavirus lockdown measures may be taking its toll — with the number of deaths nine times higher than in Finland, nearly five times higher than in Norway, and more than twice as high as in Denmark, according to reports. Sweden has so far reported more than 13,200 positive cases of COVID-19, the illness caused by the virus, and 1,400 deaths.

The 41-year-old Strid, who was born in Helsingborg but has lived in Stockholm for the past three years, addressed Sweden's unorthodox response to the coronavirus during a new interview with "The MetalSucks Quarantinecast".

Speaking about how he and his countrymates are dealing with the pandemic, Strid said (hear audio below): "Things are a little bit — I don't know — confusing, I think. We're one of the few countries that are still, sort of, not in a lockdown. So we get a lot of shit [laughs] from a lot of countries right now. I can understand why, but I think there is a plan. I think people are very confused — like, are there always symptoms? Blah blah blah. Can I carry it without having any symptoms? So there's not really any clear answers, and I think that makes people a little bit nervous, obviously, and I can understand that. So it's pretty hard to deal with.

"We've been in quarantine for about three weeks," he continued. "My girlfriend is Italian — she's from north of Italy. Her parents are locked in and they go on Skype every day and talk. The situation in Italy is even more scary — that's complete lockdown.

"I know that the situation in America is really bad right now, and especially in New York as well," he added. "You're not quite sure how to deal with it. Am I gonna stay in quarantine for all of eternity? It's not that bad in the end. Like they say, back in the Second World War, your relatives got called into war. All you have to do is sit on the couch and watch Netflix. And that's kind of true. And it's not that bad. I'm very grateful. I have a garden. I can move around. But then we have people stuck in apartments with no balcony and kids and everything. So, it's rough."

Asked if Swedes are still being advised to stay home as part of the country's strategy of relying on people's sense of responsibility instead of introducing new laws, Strid said: "Everybody is asked to stay at home, and don't do any unnecessary traveling — stuff like that. But I went to downtown Stockholm this weekend, and all the patios are open, and it was packed. And I was, like, 'Are you crazy?' I couldn't believe it. It's unbelievable. I don't get it… It's bad. So it made me very sad to see that, and very angry as well."

Last month, SOILWORK released a brand new song called "Desperado". It was the second installment in the band's "Feverish" triology.