Finnish melodic metal titans SONATA ARCTICA will embark on "The Raven Still Flies Over Europe" tour in the fall. Support on the trek, which will kick off on November 11 in Stockholm, will come from EDGE OF PARADISE and TEMPLE BALLS.

SONATA ARCTICA will be touring in support of its tenth studio album, "Talviyö" (which means "Winter Night"),due on September 6 via Nuclear Blast.

Comments keyboardist Henrik "Henkka" Klingenberg: "After working our asses off since last summer with our new album, we finally got it done and now is the time to go back out on the road with some exciting new material and new shenanigans and what have you. Last spring, we had a really amazing time touring in Europe with the acoustic stuff and I'm sure it will be just as fun to come back once again and make some new memories together. We got a couple of killer support bands with us so there's definitely some great nights ahead for all of us."

"Talviyö" was recorded between September 2018 and May 2019, produced by Mikko Tegelman and SONATA ARCTICA in Studio57. Additional recordings took place in various other places. The mixing was done by Mikko Tegelman and Pasi Kauppinen and the mastering was handled by Svante Forsbäck for Chartmakers. 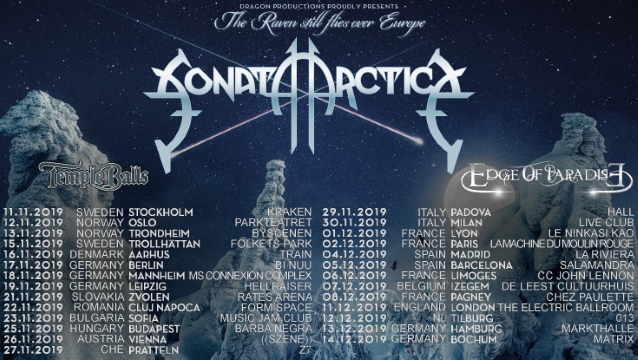