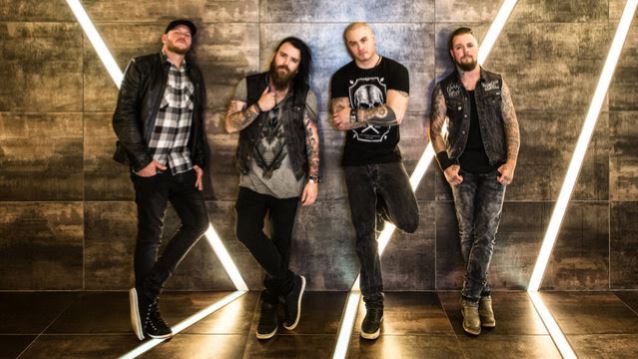 Commented Axelsson: "As most of you know by now, I haven't been touring with my boys in SONIC for a while.

"SONIC SYNDICATE has been my family and my life for many years and I've met so many great people and experienced things I never thought I would. I've had the time of my life — so many of my dreams have come true in so many ways — but sometimes you have to make hard choices in life, and it's time for me to move on, because I am in a place where I need to focus on my family and private life.

"I hope you understand my decision.

"I would like to thank all you guys who came out to our shows for your endless love and support. It has meant so much to me and the guys that we could never express in words how we feel.

"Before I officially go and start my new life, I'd like to ask you one more thing. Please take care of the boys, my brothers, because I love them with all of my heart, and although we'll keep contact and see each other from time to time, I will truly miss them and the music we've made together.

"So, with everything above said and done, I would like to officially introduce Miche to the SONIC SYNDICATE family. What I ask from you guys is to please open your hearts for this great guy who's an awesome bass player and give him a warm welcome."

Coinciding with the introduction of SONIC SYNDICATE's new bass player is the premiere of the official music video for the song "Diabolical Work Of Art", taken from the band's latest album, "Sonic Syndicate".

Commented SONIC SYNDICATE singer Nathan J. Biggs: "People pretend to be something they're not. That's what makes the world go 'round. I'm willing to bet every single person that reads this has had a person come into their lives who was either drop-dead beautiful, someone they looked up to, or someone that promised the world. Only to be revealed as an ugly deceiving c**t. The lyrics tackle this head-on. I know who I'm talking about, but, to you, it could be a relationship, a job, a best friend or whatever. The point being, I would rather people just wore their real skin rather than hiding behind a mask. However, with the video we wanted to show this in an abstract way. I've seen too many videos with cheesy effects and violence. We wanted to show pristine, sheer beauty. How immaculate on the outside doesn't mean pure on the inside. How how society and people, however well hidden, have a darkness inside that sooner or later finds its way out."

"Sonic Syndicate" includes a total of 11 tracks, while the limited edition digipak features no less than three bonus tracks.

Commented SONIC SYNDICATE guitarist, main songwriter and founding member Robin Sjunnesson: "We decided to go with this one as a 'self-titled' release. Mainly because as an album, we have put everything we've got into it. All of our experience as musicians, the evolution of the music, the sound from all eras of the band, and also the road we have taken as people. This is us, this is SONIC SYNDICATE in all its beauty and destruction. It shows our strength, our love for melody, our scars, our energy. The cover art is a definite representation of that. In the background, a battle-torn city laid to waste, four figures emerging together with only each other to depend on in an environment so harsh, only those with a tough heart, body and soul can survive."