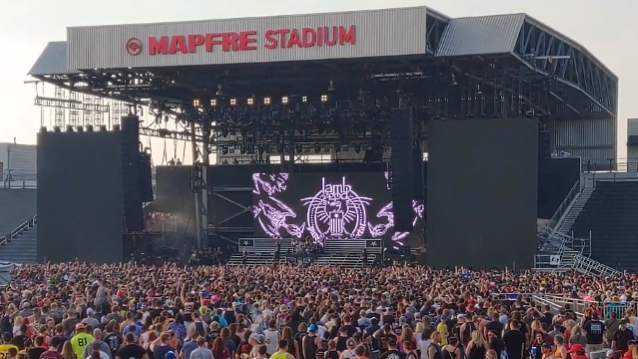 The Sonic Temple Art + Music Festival reopened earlier today after attendees were evacuated for about an hour Sunday due to high winds and storms in the area.

The three-day event at MAPFRE Stadium in Columbus, Ohio is scheduled to conclude tonight with a performance by the FOO FIGHTERS.

The evacuation was announced around 6:00 p.m. and the festival reopened about 90 minutes later.

According to reports, several performers — including BRING ME THE HORIZON and CHEVELLE — had their main-stage sets canceled earlier today due to high winds. JOAN JETT & THE BLACKHEARTS were originally scheduled to appear on a side stage just before 7:00 p.m., but their performance was pushed back to 8:30 p.m.

Earlier in the month, the inaugural edition of another Danny Wimmer Presents-produced festival, Epicenter, in Rockingham, North Carolina, had to evacuate due to harsh weather.

Please follow instructions of festival + security staff along with local law enforcement to exit the venue in a safe, calm, and orderly fashion (1/2) pic.twitter.com/uxNwVrGgwr

The weather has passed and it is now safe to resume the festival!
The gates are now open. Foo Fighters are scheduled to perform at 9:00PM.

If you left the parking lot, you will be let back in by presenting today’s parking pass. pic.twitter.com/CSgIFhuAyP