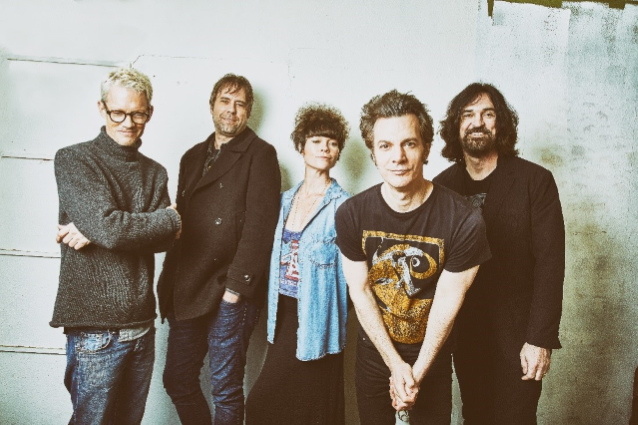 Los Angeles alternative rock group SONS OF SILVER has set a June 26 release date for the "Doomsday Noises" EP. The group previewed the EP's release with two singles and videos: "Read 'Em Their Rights", with its simmering and swaggering punch, and the infectiously incendiary "World On Fire". While the EP's title is timely, vocalist Peter Argyropoulos says: "All of these songs, including all of the lyrics, were written and recorded a few months before the COVID-19 pandemic."

"There's a lot of 'shouting' going on in the world at the moment, a lot of bullying, a lot of pontificating," Argyropoulos continues in describing how they came to the "Doomsday Noises" title. "The noise is deafening. These are the sounds of societal transformation. But they can easily be misinterpreted as social collapse. We probably should've put a question mark at the end of the phrase."

The group's collaborative songwriting style, signature sound and collective years of experience is what make SONS OF SILVER such a standout phenom in the indie alt scene. In addition to Argyropoulos, original PEARL JAM drummer Dave Krusen (who was recently inducted into the Rock And Roll Hall Of Fame) and CANDLEBOX bassist Adam Kury provide the backbeat while former SKILLET guitarist Kevin Haaland and keyboardist and esteemed engineer Brina Kabler round out the band's signature sound. Logging nearly 80 shows per year, the musicians collaborated more than ever back in the studio. On "Doomsday Noises", songs spun off from jam sessions as a unit and the writing process relied on their musical interplay.

"We all love hanging out together," Argyropoulos explains. "We probably spend more time talking politics, sports, food, family or whatever than we do making music. All those interests, all of those conversations, they make their way into the music. The songs are a snapshot in time of whatever happened to be on our minds. There's some comedy and some tragedy; some dissonance and some harmony; some nostalgia and some abandonment; some punk and some rock. Even more, the fact that we can talk about anything and everything translates into a very comfortable and supportive musical environment. Everyone feels free with any idea and no one feels any idea is sacred. We're all good enough to lead the band., but none of us is good enough to be the band. We allow space and time for one another to find our way. The EP represents where each of us was at along our journey together."