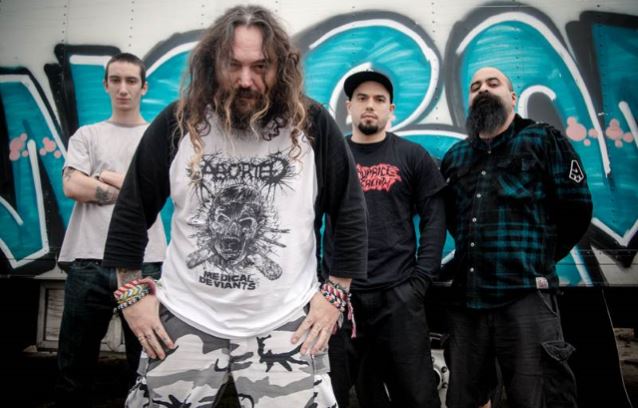 SOULFLY: Lyric Video For New Song 'We Sold Our Souls To Metal'

SOULFLY's tenth studio album, "Archangel", will be released on August 14 via Nuclear Blast Entertainment. The CD was produced by Matt Hyde, who has previously worked with SLAYER and CHILDREN OF BODOM. The cover artwork was created by artist Eliran Kantor (TESTAMENT, ICED EARTH, SODOM) and can be seen below.

The lyric video for the song "We Sold Our Souls To Metal", taken from "Archangel", can be seen below.

States SOULFLY mainman Max Cavalera: "This lyric video is a celebration of all forms of metal. This song was written as an anthem for metalhaeds all over the world! We gathered footage and photos from our tribe, showing how free the spirit of metal really is. Respect!"

Max previously told Metal Wani about the mindset that is required to write a track like "We Sold Our Souls To Metal": "It just happens. You can't explain it. It's one of those things… [When] you play it, it has an instant reaction on the listener."

He continued: "I was very curious about that, so I was playing around with the song, playing it for people, to see what kind of reaction it gets. And almost everybody, the reaction was, like, 'This is so crazy. I can't wait 'till you guys play this live.' It's got this kind of New York hardcore chant that we do in the chorus — like, gang vocals. It's really, really fun, and everybody gets to sing together. That's why I was thinking that it's gonna become an anthem — the chorus, all the fans are gonna sing it together, and it's saying something. 'Cause, 'we sold our souls to metal,' I think every metalhead feels like that — that we did kind of a pact and we sold our souls for this music that we love so much. So it's something that I think [they'll] sing that with some kind of pride. I think it's gonna happen when that song comes out, at least. And then it ends [in a] very PINK FLOYD [-like way], which is really strange; I don't know why we did that. I still don't know if it was the right thing, but it came out like that. Marc [Rizzo] just did some really crazy guitars at the end of it that is just, like… It goes from total metal into crazy PINK FLOYD, but it works. I mean, it's really wild. And we like wild stuff. I always was drawn to weird, weird stuff, and that's definitely weird, in a good way."

Max told Groovey.TV about the new CD's musical direction: "It's very influenced by the stuff I listen to right now — 1349 and BELPHEGOR, BEHEMOTH… I've been listening to a lot of death metal. Don't ask me why. I don't know why. I just fucking love the extremity of it. So, yeah, it's gonna be a really cool record. It's our tenth record. And I'm very excited for this album. And then I will tour for 'Archangel' probably for the next year and a half, two years, non-stop."

In a separate interview with Metal Wani, Max called "Archangel" "an interesting record." He explained: "It's one of those [records] that come out once in a lifetime, an album like that comes out — really crazy sounds and very different dimensions. It's more experimental than the other stuff. It's still heavy as hell, and it's still fast. And Zyon's [Cavalera, Max's son] playing drums on it. He's actually playing really good. He reminds me of a young Dave Lombardo [SLAYER]. The fills that he's doing [are] really amazing; he surprised everybody in the studio. Matt Hyde is producing; he worked with SLAYER before. So it's really cool; a really good team."