One of the most influential bands in rock music, Grammy Award-winning multi-platinum band SOUNDGARDEN, today announced a North American headline tour that will kick off on May 3 in Atlanta, Georgia at the Fox Theatre. THE PRETTY RECKLESS and THE DILLINGER ESCAPE PLAN will support select dates. A special ticket pre-sale for fans who are signed up to SoundgardenWorld.com and ChrisCornell.com will launch Tuesday, February 28 at 10:00 a.m. local time. Tickets will go on sale to the general public Friday, March 3 at 10 a.m. local time.

SOUNDGARDEN will also appear at a variety of previously announced summer festivals, including WXTV Rockfest, Welcome To Rockville, Fort Rock Festival, 89.7 The River's Rockfest, Rock On The Range, and more. See below for a complete list of confirmed dates.

SOUNDGARDEN has set March 10 as the release date for a remixed deluxe version of the band's 1988 full-length debut album, "Ultramega OK". This expanded version of the record is described as a "correction" of the original mix, which the band was never satisfied with. Guitarist Kim Thayil told The Pulse Of Radio that the band wanted legendary Seattle producer Jack Endino to remix it almost immediately after it first came out. "We were never happy with the mix, and from day one, the band, the record label — which was Greg Ginn at SST — and Jack Endino all said, 'Yeah, let's do this. Let's remix it,'" he said.

Although SOUNDGARDEN initially intended to remix the disc shortly after its original release, the group signed a major deal with A&M Records and started work on its next album, 1989's "Louder Than Love", abandoning plans to revise "Ultramega OK" at the time.

SOUNDGARDEN reacquired the master tapes of "Ultramega OK", which was out of print for years, in 2016.

The band then recruited Endino to finally remix the disc, with Thayil working in the studio with him.

In addition to the remixed original album, the new edition of "Ultramega OK" will come with six early versions of songs that wound up on the disc. The tracks were recorded in 1987 in Seattle and mixed by Endino last year. All the songs ended up also being recorded for "Ultramega OK".

Since reuniting in 2010 following a 13-year hiatus, SOUNDGARDEN has embarked on an extensive restoration of its catalog, including deluxe archival versions of the classic albums "Badmotorfinger" and "Superunknown", along with a three-disc collection of rarities, B-sides and previously unreleased tracks called "Echo Of Miles: Scattered Tracks Across The Path".

SOUNDGARDEN has been slowly working on material for its seventh studio album and will enter the studio sometime in 2017 to begin recording. The disc will follow up 2012's "King Animal".

Work on a new record started in 2015, but SOUNDGARDEN took breaks while Cornell toured his "Higher Truth" solo effort and drummer Matt Cameron hit the road with PEARL JAM. 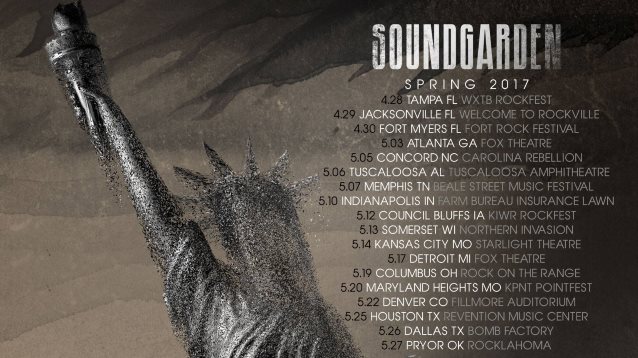