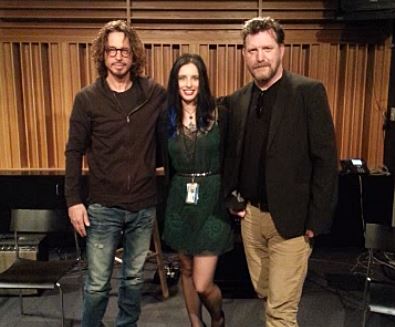 Nikki Blakk of the San Francisco, California radio station 107.7 The Bone recently conducted an interview with Chris Cornell and Ben Shepherd of reunited grunge legends SOUNDGARDEN. You can now listen to the chat in the YouTube clip below.

SOUNDGARDEN is currently on a break after touring for the better part of a year behind its 2012 reunion album, "King Animal", but several members of the band are already thinking about full-length studio effort number seven. Asked what kind of evolution might take place on the next SOUNDGARDEN disc, drummer Matt Cameron told O2 Academy, "We have a way of writing and playing together — the evolution might have already happened. I think we'd like to make a record that's more rock, that has more bite and more guitars."

Guitarist Kim Thayil added, "We don't have a plan, but we have a desire and interest in a new album." Thayil also said there's less pressure to deliver these days, explaining, "Record companies aren't as demanding — they don't have the leverage they used to have."

Cornell told The Pulse Of Radio he doesn't see any reason that the band, which regrouped in 2010 after a 13-year-hiatus, can't keep going. "I think it can," he said. "I don't see any reason why not. The overall attitude about keeping it going, that attitude seems to be really good. I mean, there's nothing stopping us from continuing to make records, that's for sure, and continuing to play shows. We had a great experience doing this album and since we've been back together everything we've done has kind of been that way."

Cornell will launch a solo acoustic tour on October 15 in San Diego, and is currently collaborating in Nashville with Joy Williams and Charlie Peacock on a new song called "Misery Chain".

The tune will be included on the soundtrack to the upcoming film "12 Years A Slave", which stars Chiwetel Ejifor as a pre-Civil War free black man who is kidnapped in New York and sold into slavery.

Cameron hits the road with PEARL JAM on October 11 in Pittsburgh, four days before the group issues its 10th album, "Lightning Bolt".

SOUNDGARDEN's very first record releases are being reissued on CD, double vinyl and as a digital set on November 26 via Sub Pop Records.

The set will include the band's entire debut EP, "Screaming Life", as well as bonus tracks from its "Fopp" EP and songs that appeared on the "Sub Pop 200" compilation, all initially issued in the late Eighties.