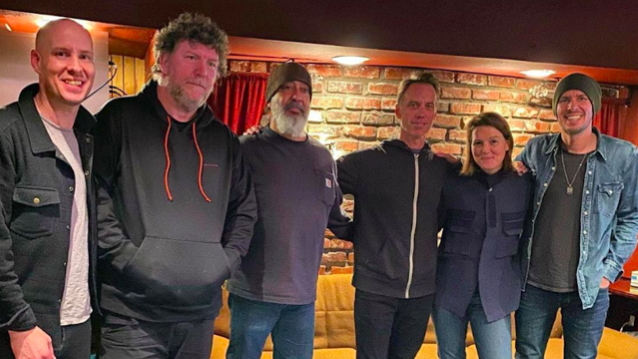 For this year's "Record Store Day", the surviving members of SOUNDGARDEN teamed with singer Brandi Carlile to record new versions of "Black Hole Sun" and "Searching With My Good Eye Closed".

The tribute to late SOUNDGARDEN vocalist Chris Cornell was released as a 12-inch on September 26, which is the second of three separate "Record Store Drops" this year.

The songs were recorded at Seattle's London Bridge Studio, a legendary place that hosted both SOUNDGARDEN and Carlile early in their careers, along with many other Seattle music luminaries.

Thayil added: "I assume that Brandi chose to record 'Searching With My Good Eye Closed' because it’s a beautiful song that is accommodating of her vocal style. I'm really happy that she chose this song, because her interpretation is absolutely amazing. It's beautifully emotive, floating and trippy. Her version sent shivers down my spine."

Earlier this year, Carlile wrote about recording her early demos at London Bridge with her band, saying, "SOUNDGARDEN were just gods to us back then. Total pioneers and unreachable to us in every way. We went about making our demos and cleaning the studio when we couldn't afford the bill never knowing that in November of 2019 we would go back to London Bridge and RECORD TWO SONGS WITH THEM!! [Chris Cornell] was as great as a human singer can get and now he's an angel. Thank you Kim, Ben, and Matt. I'll never forget this day for as long as I live."