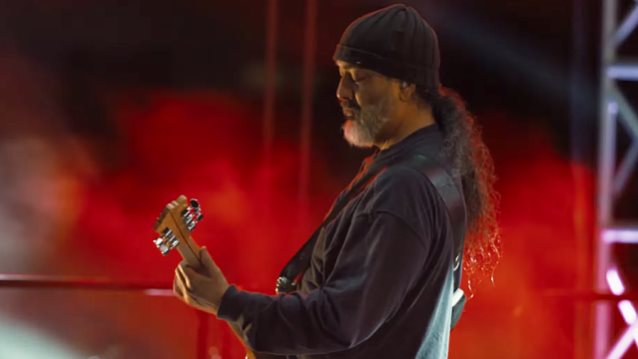 Reunited grunge legends SOUNDGARDEN, who will celebrate the 20th anniversary of the release of their 1994 album, "Superunknown", by reissuing in a deluxe edition, are tentatively planning to give a similar treatment to 1991's "Badmotorfinger", most likely in 2016.

"We definitely have discussed giving this treatment to 'Badmotorfinger', for sure," SOUNDGARDEN guitarist Kim Thayil told Billboard.com. "There are some B-sides, live material, I believe there may be rehearsal material."

He added: "'Badmotorfinger' was very influential in the rock community. It had a strong influence on other musicians. 'Superunknown' probably did as well, but its success was not just with musicians but with fans as well. 'Badmotorfinger' had an impact with listeners but also with guitarists and drummers and singers, people who started bands. It definitely deserves the same kind of treatment we're giving ['Superunknown']."

Thayil also revealed that there are still plans for SOUNDGARDEN to release a long-promised compilation of B-sides and non-album tracks. He explained: "I've been talking about that since the mid-90s — people still ask me about it in the (online) forums. But then the band broke up, and I thought when we got back together four and a half years ago we'd start on that project. But first we did the retrospective best-of [2010's 'Telephantasm'] and then a live record [2011's 'Live on I-5'] and then a new album [2012's 'King Animal'] came out, and these tours came up and now 'Superunknown''s 20. But the B-sides and all that stuff will be compiled in the future into a separate, stand-alone record."

SOUNDGARDEN will perform "Superunknown" in its entirety at a special show on June 2 at the intimate Webster Hall in New York City.

This will be just the second time that the band performs the album live from start to finish, following a similar show at the South By Southwest festival in Austin, Texas this past March.