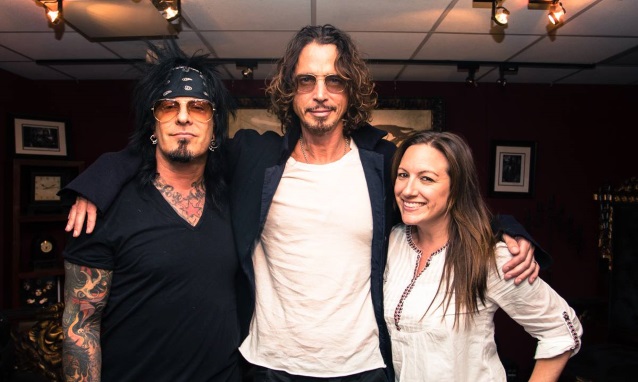 SOUNDGARDEN singer Chris Cornell was interviewed on a recent edition of the "Sixx Sense" radio show hosted by MÖTLEY CRÜE and SIXX: A.M. bassist Nikki Sixx. You can now listen to the chat below.

As previously reported, the 20th-anniversary reissue of SOUNDGARDEN's breakthrough 1994 album, "Superunknown", sold 5,700 copies in the United States in its first week of release to land at position No. 51 on The Billboard 200 chart.

The 20th-anniversary reissue of "Superunknown" was made available in two deluxe versions. The Deluxe Edition is a 2-CD package featuring the remastered album along with disc two consisting of demos, rehearsals, B-sides and more. The Super Deluxe Edition is a 5-CD package featuring the remastered album, additional demos, rehearsals and B-sides and the fifth disc is the album mixed in Blu-ray Audio 5.1 Surround Sound. The Super Deluxe Edition is incredibly packaged in a hardbound book with a lenticular cover, liner notes by David Fricke and newly reimagined album artwork designed by Josh Graham. It also features never-before-seen band photography by Kevin Westerberg. A 2-LP gatefold of the original 16 vinyl tracks remastered on 200-gram vinyl in a gatefold jacket was also made available. In addition, the "Superunknown" singles and associated b-sides with newly interpreted artwork sleeves by Josh Graham was reissued on Record Store Day, April 19, as a set of five limited-edition 10-inch vinyl records.

In a recent interview with Loudwire Nights" host Full Metal Jackie, Chris Cornell stated about "Superunknown": "I think the main thing is, it's sort of unquestionably SOUNDGARDEN in every way. I don't think there are songs on it that could have or would have been written by anyone else, arranged that way, performed that way, whether it's the music, lyrics, the sounds. I think we had already come into our own and had our own sound, but 'Superunknown' cemented it as living in its own world. It created an autonomy for us that we could make albums that were strictly SOUNDGARDEN albums that no one else was going to sound like and no one else could write. We kind of lived in our own world. I think that was important for us. I think we started out as a band that way, and I think during the early '90s, we then sort of lost the autonomy being lumped into other Seattle bands. That wasn't bad; that was a good thing. It was great that it was us and our friends kind of conquering the world. But it took away some of that autonomy for all of us. And 'Superunknown' for us, in one fell swoop, immediately got that back. There are songs on it that just, if you look at the history of rock, they're just nothing like anything else. And that was the beginning of it. I think that was the seed that led to 'Down On The Upside' and 'King Animal' in terms of our process and in terms of us owning who we are. So it was a good period for us. I couldn't say that we knew that we were doing that when we were making it. We were making that album just like any album. One song at a time. Just writing songs, but it became that."