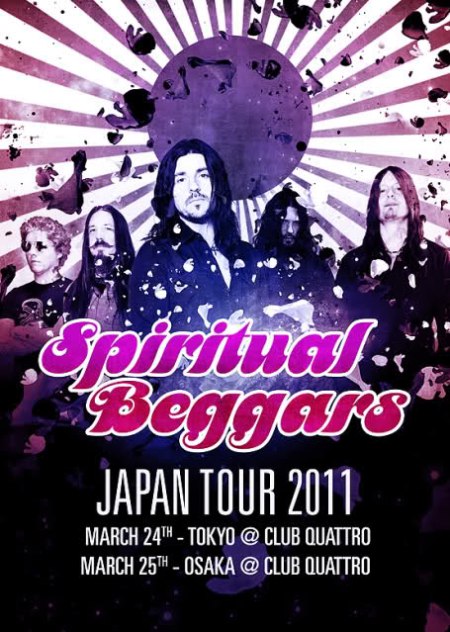 Commented the band in a statement: "As much as we were looking forward to playing these shows for our fans in Japan, the time is not right for this now. Our outbound flights got canceled by the airline and our promoter thought it best to pull the plug.

"We are deeply saddened by the recent events in Japan and we wish everyone there the best and hope they'll be safe moving forward. Donations that will help the situation in Japan can be made at Redcross.org."

Japanese promoter Creativeman has issued a statement and ticket refund information in Japanese on its web site at this location.

The live recording was mixed in Sweden by Staffan Karlsson and Rickard Bengtsson at Studio Landgren 5.3 and The Sweet Spot Studio in December 2010. The artwork and design was handled by Hippograffix.

The new lineup of SPIRITUAL BEGGARS made its live debut on October 1, 2010 at Kyttaro club in Athens, Greece.

Fan-filmed video footage of SPIRITUAL BEGGARS' first live show in five years can be viewed at this location. One of the clips is available below.

SPIRITUAL BEGGARS's seventh studio album, "Return To Zero", was released in Japan on August 25 via Trooper Entertainment Inc. — the label founded by legendary Japanese heavy metal music industry guru Tetsu Miyamoto. The Japanese special edition comes in a glossy paper box with a poster and a sticker of the CD front cover. The Japanese edition also features a bonus track, a thunderous cover of URIAH HEEP's "Time To Live" off the legendary U.K. band's 1971 "Salisbury" record.

"Return To Zero" was released in North America on October 12 via InsideOut Music. The follow-up to 2005's "Demons" was recorded at Sweetspot Studio with producer Rickard Bengtsson.