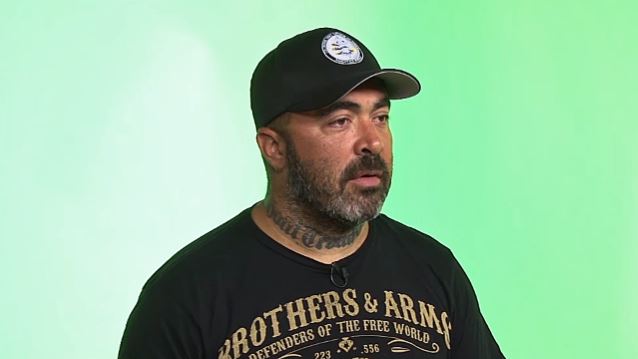 STAIND frontman Aaron Lewis has slammed Colin Kaepernick for deciding not to stand for the national anthem in protest of the way African-Americans are treated in the U.S., saying that the San Francisco 49ers quarterback should be "financially penalized every time he doesn't stand."

By taking a stand for civil rights, the 28-year-old NFL player used his platform and status to raise awareness to issues affecting minorities in the U.S. However, his refusal to support the American flag as a means to take a stand has brought incredible backlash, with detractors accusing him of disrespecting his country, the military, police officers, his team, and even the NFL.

Asked in a new interview with Radio.com what he thinks about the Kaepernick controversy, Lewis — a conservative Republican who calls himself a patriot in his Twitter bio — said: "It absolutely infuriates me. And it makes me even more angry that the NFL, which is so intertwined into this nation, is allowing it to take place — that they're not benching him, they're not financially penalizing him every time he doesn't stand… That is a direct slap against the country that makes the NFL as great as it is. The rest of the world, for the most part, doesn't even care about football; their football is soccer. And for the NFL to just sit back and allow him to do that without any sort of penalty or repercussion, I don't understand that."

Lewis continued: "He's invoking his right to do what he believes, but this is where freedom and liberty get a little bit skewed. Your freedom and your liberty to do that, on the reverse side, is my freedom and liberty to not have to deal with it, and to not have it affect my life. And that's the give-and-take of freedom — yeah, you're free to do whatever you wanna do, but I'm also free from the consequences of your actions. And that's kind of been lost in the definition of freedom, because the consequences are the key thing that everybody just kind of… everything gets a little skewed there."

Kaepernick defended his actions last month, telling reporters he will continue to remain seated during the national anthem in order to bring awareness to racial injustice and police brutality.

"This country stands for freedom, liberty, justice for all — and it's not happening for all right now."

He added: There's people being murdered unjustly and [people are] not being held accountable. Cops are getting paid leave for killing people. That's not right. That's not right by anyone's standards."

Kaepernick told NFL Media in a separate interview: "I am not going to stand up to show pride in a flag for a country that oppresses black people and people of color. To me, this is bigger than football and it would be selfish on my part to look the other way. There are bodies in the street and people getting paid leave and getting away with murder."

The 49ers issued the following statement about Kaepernick's decision: "The national anthem is and always will be a special part of the pre-game ceremony. It is an opportunity to honor our country and reflect on the great liberties we are afforded as its citizens. In respecting such American principles as freedom of religion and freedom of expression, we recognize the right of an individual to choose and participate, or not, in our celebration of the national anthem."

Lewis told Billboard earlier in the year that he would support Republican candidate Donald Trump in the U.S. presidential race, even though he was "disappointed" by the real estate mogul "with the bickering and the name-calling."