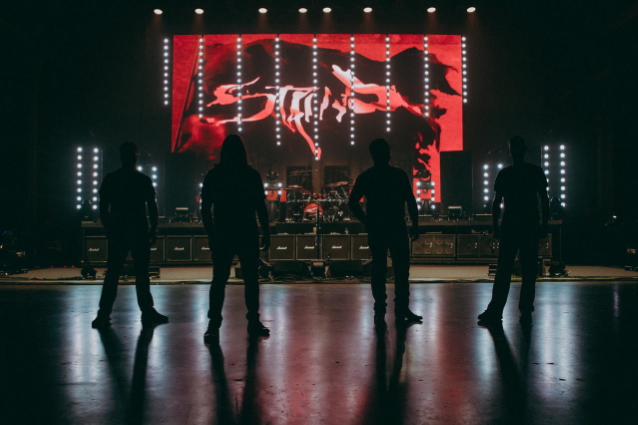 STAIND has finally commenced work on its first new music in nearly a decade.

The news of a possible new record from STAIND was broken yesterday (Tuesday, June 9) by frontman Aaron Lewis, who was a guest on GODSMACK frontman Sully Erna's Internet show, called "Hometown Sessions".

Speaking about his current activities, Aaron said: "I'm working on new STAIND shit… We're toying around with some creativity."

Lewis also confirmed that he is making a new solo LP, presumably to be released later this year.

"The last show that I played here in Nashville, just me acoustically, with no back-up band or anything," he added. "I was playing some of the songs off the country records, and I was playing some of the songs from STAIND, but all just me and the acoustic guitar. That simplifies everything — that takes away the country flavor, that takes away the rock flavor, that takes away everything and just leaves the skeletal structure. And Scott Borchetta, the president of my record label, was so moved by that show, this next record he wants from me, which would have been a country record, he wants a totally acoustic record."

Last year, Lewis said that new STAIND material would likely sound "pretty brutal. It would be continuing back to how heavy we were to begin with, when 'It's Been Awhile' and 'Outside' and 'So Far Away' and songs like that, that were radio songs, confused everything. 'Cause if you came and saw us at a show, the show was a hell of a lot heavier than most of the songs that you would hear on the radio. And I would have to say that it would be going back in the direction of just heavy… I think I've got some pent-up stuff that would probably flow out quite nicely over some of Mike's [Mushok] heavy riffs."