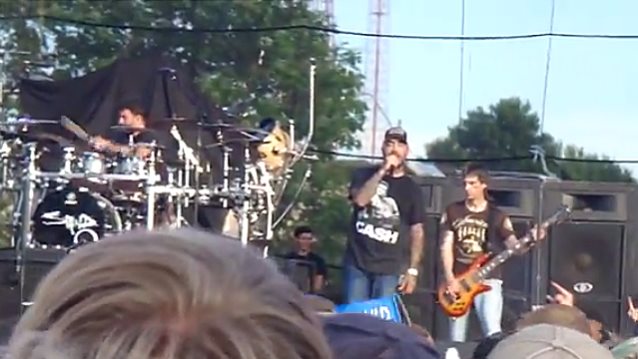 STAIND frontman Aaron Lewis stopped the band's show mid-song at yesterday's (Saturday, May 31) Rockfest in Kansas City to berate concertgoers who were allegedly "molesting" a teenage girl while she was crowd surfing at the gig. In the middle of a performance of the track "Something To Remind You", Lewis took a break from singing to exclaim (see video below): "Alright, listen up, you fucking assholes. That fucking girl right there is, like, 15 fucking years old and you fucking pieces of shit are molesting her while she's on the fucking crowd. Your fucking mothers should be ashamed of themselves, you pieces of shit. You should all be fucking beaten down by everyone around you for being fucking pieces of shit. If I fucking see that shit again, I swear to God, I will point you out in the crowd and have everyone around you beat your fucking ass."

Fifteen bands — including KORN, FIVE FINGER DEATH PUNCH, KILLSWITCH ENGAGE, BLACK LABEL SOCIETY and STEEL PANTHER — played on two stages at this year's Rockfest, billed as the largest one-day rock festival in the nation, in front of more than 50,000 fans at Penn Valley Park around the Liberty Memorial.

For the most part, "It has been a pretty well-behaved crowd," Joe Litvag, executive producer of Rockfest and AEG's senior vice president, told The Kansas City Star. "But when you have more than 50,000 people — well, there were a few alcohol-related incidents. But nothing unusual."

Police reported only one arrest as of 9 p.m. Saturday, for trespassing.

Part of the reason Rockfest — which celebrated its 10th anniversary this year — has grown in popularity is the fact that it remains affordable. According to Fox4KC.com, tickets purchased before the day of the festival went for $45. In addition, no food or drink sold at the show cost more than $5, including beer and other alcoholic beverages.

As previously reported, Lewis will stage the fourth annual "Aaron Lewis & Friends" benefit concert to raise money for his foundation, It Takes A Community, which is dedicated to serving the educational needs of the children in his area. According to The Pulse Of Radio, this year's show will feature a rare acoustic performance from STAIND itself, along with an unplugged appearance from Brent Smith and Zach Myers of SHINEDOWN.

The benefit concert will take place on June 27 at The Pines Theater at Look Park in Florence, Massachusetts. 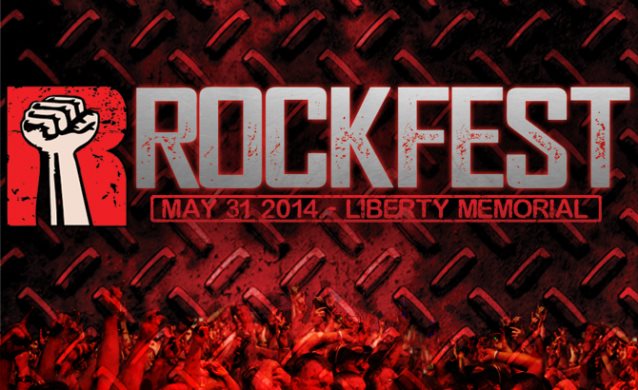