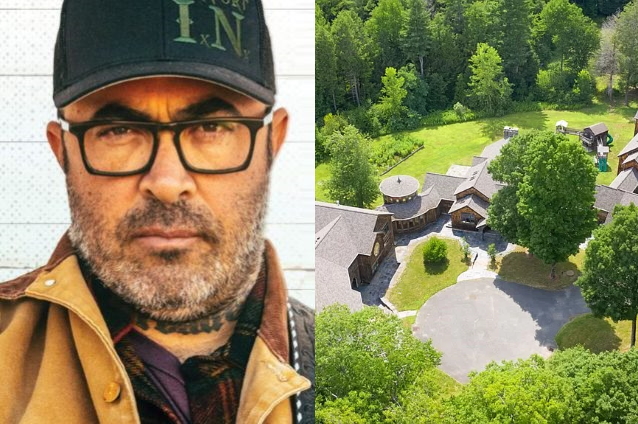 STAIND frontman Aaron Lewishas dropped $505,000 from the asking price of his Massachusetts home.

According to the listing, the "unique four bedroom, five full bath/ three half bath main house includes an in-law apartment and an Olympic sized indoor/heated, salt water pool. Other special features include a Vantage Lighting System, an indoor/outdoor intercom system, a security system, a large game room and home office, a steam shower and overflow tub in the master bath, a humidification system, and a full house commercial generator. The horse barn includes an apartment as well as a fireproof walk-in vault."

A video tour of the home is available below.

The listing agent told The Boston Globe in 2020 that Lewis was selling in order to spend more time in Nashville, where he has been focusing on a country music solo career.

Lewis's new solo album, "Frayed At Both Ends", will be released on January 28.

Aaron first dipped his toes into country music with his 2011 EP, "Town Line". His second full-length album, "Sinner", arrived in the fall of 2016 and was followed by a stand-alone single, "Folded Flag".

STAIND has released seven albums since 1995, the latest being 2011's self-titled effort. The band has had a number of hit songs during its first two decades, including the Top 10 smash "It's Been Awhile" from the No. 1 album "Break The Cycle". Follow-up LPs "14 Shades Of Grey" and "Chapter V" also topped the Billboard chart.

Last summer, STAIND completed a U.S. tour as the support act for KORN.