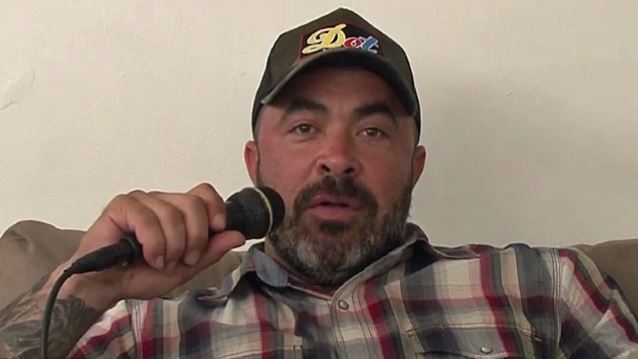 STAIND singer Aaron Lewis is preparing to enter the studio to record the follow-up to his first full-length country album, "The Road", which came out in November 2012 via Blaster Records through Warner Music Nashville. Speaking to Artisan News before his June 7 concert in Englewood, New Jersey, Lewis said about his new solo CD plans (see video below): "We're trying to get the final details put together. It took a while for all the record-label stuff to iron out and get solid on that side of things. So in the next couple of months I'll be hitting the studio. We're in the last stages of a record being recorded, where we're trying to figure out who's gonna produce it and where we're gonna do it and that type of stuff."

Asked how the country-music scene has received him so far, Lewis said: "The fact that radio hasn't really come around to playing my songs yet, there is a little bit of a backlash there. It seems like the artists that I end up playing with and doing shows with are fans of what I do. It's just one of those weird things. It's such a good-old-boys network in Nashville, it's so political in Nashville, and I'm not one to necessarily play along; I tend to stick to my guns, and sometimes that's not what they want you to do."

He continued: "Nashville is a machine. It has the writers that write all the songs, and then it has the performers that go into the studio to record them and then go out on tour and play them. And I don't want anything to do with somebody writing songs for me… I'm certainly not gonna change what I'm doing in order to get on radio."

STAIND played just a handful of shows last year, with Lewis devoting much of 2014 to solo shows.

The last STAIND album, a self-titled effort, came out in 2011. The band does not yet have plans to enter the studio.

Guitarist Mike Mushok told the Midland Daily News back in May 2014 about the band's future, "It's got to be something that Aaron wants to do. I always enjoy writing with [Aaron] and I look forward to it. We complement each other. He makes what I do better."